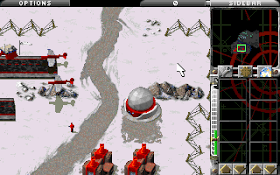 The plot in Red Alert originated some time after the Second World War. Albert Einstein develops a time machine, dubbed "Chronosphere", and uses it to remove Hitler from history and thus prevent World War II.
Unfortunately, the effects of the past are unforeseen. Germany did not wage a war, but uncontained Soviet Union headed by Stalin takes a massive attack on Europe.

The player can choose one of the two warring parties: the Alliance or the USSR. Accordingly, the goal of the Allies - to stop Stalin until he captured the whole world, for the Soviet Union - to achieve complete conquest of Europe. Depending on the chosen side, the player leads to the victory of one of the two alternative endings:

«Red Alert» in essence is the same as Command & Conquer with new buildings and some new units. «Red Alert» has received good reviews for its user interface, which was much more developed than in other games at the time. For example, there was no limit on the number of selected units, can also be ordered as many units as enough resources.
Battles in «Red Alert» pass both on the ground, on the water and in the air. Each side (Allies or the Soviets) can train the Army, Air Force and Navy. Each side also has unique features, although in «Red Alert 2" they were balanced so that each unit's ability to withstand such an option for the other party. For example, in «Red Alert 2", the Soviet defensive tower Tesla was opposed to Allied Prism Tower-.
The balance is inclined to the Soviet side. Units of the Soviet side include heavy tank (Fantasia on the T-80), launcher, for some reason called in German V-2 (V-2), although it looks like the Soviet "Luna-M", flamethrower, helicopter Mi-24 helicopters, submarines (judging by the commercials, "Pike-B"), a tank of "Mammoth" antipersonnel mine-layer and air support aircraft MiG-27 (instead of which all the cutscenes painted MiG-29) and Yak-9, and a special unit Ivan. The Allies have at their disposal a light tank (apparently, BMP M2 «Bradley"), Medium Tank (of course, M1A2 Abrams), special-unit Tanya anti minelayer, a jeep "Ranger", gunboats, battleships, cruisers and Helicopter AH-64 Apache.

Game mechanics Red Alert is a traditional algorithm "rock-paper-scissors", but unlike the C & C balance has been strongly simplified and now even a simple infantryman can destroy a tank. The tank can easily destroy the machine gun pillbox, a small group of grenadiers as easily cope with the tank, if it is not covered by an anti-technology or its infantry, which forced to use different types of combat troops. However, as the game mechanics are essential concept of "fire power" that actually could win at the expense of accumulation and the simultaneous use of a huge number of similar tanks. In a multiplayer game, this tactic is called "tank rush", the essence of it boiled down to a desire to make an early game session as a large number of tanks, which will then be thrown at the enemy. If another player at that time did not develop such a one-sided, his chances of surviving the blow sharply reduced.

The game balance is drawn up in accordance with the ideology of the game. USSR mainly relies on brute force, for example, his army has neither the light nor the medium tanks, only severe (reservation is similar to medium tank allies, but is armed with two guns) and heavy (tank "Mammoth"). The advantage of the USSR on land is somewhat offset by the dominance of the allies of the sea. At their disposal are several types of ships capable of performing various tasks, including the cruiser - a unit of immense firepower. Weaknesses allies may also be offset means "not direct impact": spies, installations can hide part of the map "fog of war", as well as satellite, which, on the contrary, opens up to the player that was using the entire map. And the Soviet Union and the Allies available in their special weapons. The Allies chronosphere is capable of temporarily moving armored vehicles in any part of the map, the Soviet Union - the device "Iron Curtain", when activated by making a short period of time invulnerable fighting equipment.
In general, despite the fact that the single-player campaign to win often enough simply to collect a sufficiently large number of tanks, though occasionally it is necessary to combine different types of units to achieve maximum results.

In 1997, for the Red Alert came out two additions - Command & Conquer: Red Alert: Counterstrike, and Command & Conquer: Red Alert: Aftermath. Have been added to the new units, the mission and the soundtrack. «Counterstrike» added to the game a lot of multiplayer maps, while the single-player missions sorely lacked (in the addon included secret "Formic campaign", where the player battles against giant red ants that are constantly emerging from the ground, which gives rise to their "queen" ants. essence of this campaign - to get to it and destroy it.)
«Aftermath» added many new units available both in single and in multiplayer modes. The new Soviet combat units included «Missile Sub», «Mutually Assured Destruction Tank» (in the literal translation of "mutually assured destruction"), or "Seismic tank» (MAD Tank), «Shock Trooper» («Tesla soldiers' ) and the "Tesla-tank", Allied troops were «Field Mechanic» («The Field Mechanic") and "Chrono-tank." Also, both sides got «Demolition Truck» («Truck Destroyer"). The addon also added hundreds of new large maps.
However, the balance of this supplement weakened in favor of the Soviet Union. Missile submarines allowed to destroy enemy buildings and equipment is much more accurate and more powerful cruisers allies, "Seismic tanks", parachuted out of transportation on water in the rear vazheskoy base, allowed to cause serious damage to the Allies, while the "Chrono-tanks" were not very power and reservations.

Version for PlayStation, is a set of missions of the two additions Counterstrike and Aftermath, and the previously released on PC.
Includes exclusive video briefings before missions and scenes of victory, which was not in any addon on your PC. The scene shows a general (for both sides) objectives in the mission. General Carville later meet again in «Red Alert 2". Also increased the number of multiplet cards.
There is a modification for the PC version of the game, which adds an exclusive video briefings (respectively, need add-ons Counterstrike and Aftermath).

Communication with the Tiberium series

«Command & Conquer: Red Alert» designed as a prequel to the first game of the series «C & C». During the Soviet campaign, Kane repeatedly visited Stalin in an advisory capacity. It seemed especially Kane unleashes the battle of Red Alert, to provide a solid foundation for the coming to power of the Brotherhood of Nod. Indeed, Nadia (one of the advisers of Stalin) asks the player to keep the peace, while the Brotherhood is not passed to the action. Cain kills her and tells the player that he is - the future. Allies in the campaign leading news reports that the UN creates a detachment of special purpose, for use in future global conflicts. It was about the Global Security Council (English Global Defense Initiative - GDI).
There is a theory that justifies the obvious errors in the time line of Red Alert. It is to view the events in the game, as the origin of the two parallel stories. In the Soviet campaign, the Soviet Union is the dominant force and Kane led the Brotherhood of Nod takes control of this empire. This satisfies the events of Tiberian Dawn, takes place in 1995. On the other hand, the allies in the campaign, and they are winning, and the story flows smoothly right into Red Alert 2. Of course, this version is not without drawbacks. After all, as mentioned above, the news reported on the establishment of GDI, but the continuation of the game, Red Alert 2, does not contain any mention of it. It is obvious that these deficiencies are a result of what was originally planned only a prequel to Tiberian Dawn, and only after the game has received the widest acclaim, was created a sequel, changing the timeline.

Playing in the public domain

In commemoration of the thirteenth game series Red Alert, Electronic Arts has posted the first part for free download. Also anyone who ordered the game Red Alert 3 will receive the second part free of charge.

The comparison between the PC and PSX version

Versions released on PC and PSX, have some differences:
‹
›
Home
View web version