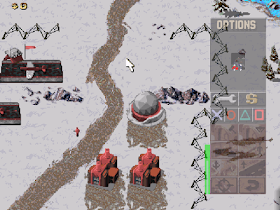 Genre: Strategy / Tactics
Perspective: Bird's-eye view
Visual: Free-roaming camera
Pacing: Real-Time
Interface: Multiple Units / Characters Control, Point and Select
Setting: Europe, Sci-Fi / Futuristic
Narrative: War
Published by: Virgin Interactive Entertainment
Developed by: Westwood Studios
Released: 1997
Platforms: PlayStation (PSX, PS1), DOS
Lovers of strategy have long realized that there is nothing more fascinating than creating full-fledged armies (many soldiers) and conducting active combat operations to destroy "nasty" opponents. Apparently so the game Command and Conquer: Red Alert, like a spring shower burst on the screens of PlayStation. At the same time, the game practically lost nothing after porting from the PC, which in itself is a huge rarity. Of course, you need to have a Link cable and a buddy from PlayStation, but a single game will be a great pleasure. Red Alert even became in something better than the first version. For example, in the "solo" mode A.I. much stronger than on the PC, although this may seem strange. An excellent dynamic scenario, excellent strategic capabilities and effective management guarantee the game a happy fate. The only pity is that you can not "survive" anywhere in the middle of the mission.
‹
›
Home
View web version