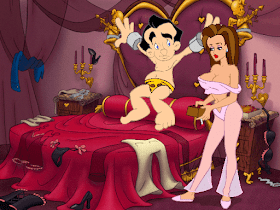 Genre: Adventure
Perspective: Side view
Gameplay: Graphic adventure, Puzzle elements
Visual: Fixed / flip-screen
Interface: Point and select
Narrative: Adult, Comedy
Published by: Sierra On-Line
Developed by: Sierra On-Line
Released: 1996
Platform: DOS
The game is a more simplified interface in the style of point-n-click, also inherent in the released in about the same years Sierra King's Quest VII and Space Quest 6. 256-color graphics were replaced by hand-drawn animation, with full voice acting of all characters and the appearance of voiceover . Unlike the previous parts of the series, it's impossible to die in Larry 7, however, the system still has a system of "points", and some actions can lead to their lowering, which in turn will make the ending inferior.

The girl from the previous part of the game binds Larry to the bed and escapes with his purse, and he barely escapes from the fire and goes on a cruise on the liner of Captain Tayy (in official localization - Captain Fellatia). To spend a week in the captain's cabin, Larry must win by cunning or cheating in ship contests and, in passing, seduce a few more women.

To the box with the license game was attached a leaf with fragrances, which could be felt by wiping out areas of different colors. The developers offered to enhance the experience of the game, inhaling the smell of various parts of the ship.

-To see the breast of Femina Nudini, you need to push a branch.
-If before the "talk about the weather" with the transformed Frigida Puritano click on the nude man with the pressed Ctrl key on the monitor, then she will come up from under the table in all its glory.
-If during the visit to Jemmy Lee Coitus in Larry's menu choose Other, Dream, then you can see the movie on the engine in which Jamie removes the topic, reveals his chest and speaks with a strong French accent: "Dreamed!"
-If you milk a stuffed beaver in the library, then during your first visit to the make-up room you can see Libidia and Konchita naked.
-If, after the "incendiary concert" with "Tails" touch the mixing console, then you can find earplugs, allowing you to freely examine the chest of Femina Nudini.
-To see how Annette Stoitly bathes in the money, you need during the second visit to her apartment, before calling the door, unfasten the fly at the third from the left of the statue.
-If you try to pour the orgasmic powder into the cocktail of Femina Nudini, then during her bathing, Larry will not block the shower.
-When Larry asks Femina Nudini if ​​she knows Al Lowe, she replies that she met him on the previous cruise in November;
-When Larry claims that Gomez is needed on the ship to balance the sexes, he objects that Al Lowe would never have thought of such a flat joke; Larry says that Gomez does not know Al Lowe well;
-Searching the sham trunk in the cabin of Lisa Minetti and finding nothing, Larry insulted says that Al Low violates all the canons of adventure games.
‹
›
Home
View web version