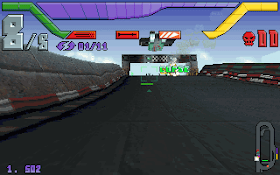 Genre: Racing / driving
Perspective: 1st-person, Behind view
Gameplay: Shooter
Vehicular: Hovercraft
Setting: Sci-fi / futuristic
Published by: Electronic Arts
Developed by: Bullfrog Productions
Released: 1995
Platforms: DOS, PlayStation (PSX, PS1)
So, according to the authors, you - the pilot of a super-modern car (or aeromobile) taking part in the races. The prize in them - win, bet - your life as sports principles of chivalry and nobility to venture competition organizers have nothing to do. All you need is to come (or fly, as the machine does not roll on the roads, and glide over the surface of a meter) first. Which means mapping is achieved, not interest anyone. How many will suffer when your opponents - is not important. More precisely it is important, but with the "minus". The more victims, the better. Your opponents are set not less bloodthirsty, so you can easily fill up the tragic statistics of racing.
What-what, and enough weapons on the road - from minipushek (by no means not small caliber) to homing missiles. And all the weapons, as it should bgg the bright future, is controlled only electronics and beats very accurately. Especially of the cars of your opponents.
Tracks are equipped with the very latest technology and the future are in different countries, on different continents. There are even Chernobyl. This is a gorgeous, whimsical and even sophisticated forms of tracks, ready to "visitors" and send them to the last journey at any time of the year. 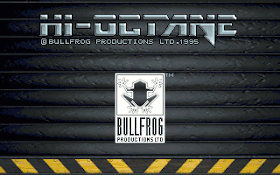 Zone of "hostilities" serve amazing beauty and elegance of robots - aircraft technical services, ready for any part of the track to come to you for help. But not in order to save him from death is very likely, then only that, topping up the fuel in the tank, again bring to the arena, if you are distracted or view of the prevailing circumstances of fatal and inadvertently missed a refueling stop. So, stepping down from the start, do not expect one piece pull over and perezhtsat storm. By the way, you too would get there - and go and shoot your computer opponents are adept at all levels of difficulty.
Environment, especially when you see the progress of the fight from the outside, is fascinating. Three-dimensional landscapes, steles, schiysya fog, haze on the horizon, and against the background of all this - turbouskoriteli roaring, screeching brakes, fractional roar of guns and gnashing of twisted metal. It seems the very air smells of burning and gunpowder. In any case, check to see if it lights up your monitor (it may be inadvertently touched any of the participants). And do not play in «Hi-Ostane" a very long time. Sleepless night, otherwise, you will be guaranteed.
After an impressive start and see a demo of that quality is not inferior to the main game, you find yourself in a small main menu of the program, but first, if you installed the game just select a language and enter your name. If gape and do not touch the keyboard, be able to see another demo, this time the story to see firsthand how difficult it will be your task.
Yet before the game case ever come to that.

- RACE - jump directly to the plot;
- OPTIONS - many settings that can help to "you" to communicate with the program during its operation;
- QUIT TO DOS - go to the DOS (you decide on this, we are sure, will not soon).
Start always with the basic settings the game.

CHANGE NAME - change the name by which you will be registered in the list of players in the tournament (something decent, but no more than eight characters).
DETAIL OPTIONS - set the level of detail. This is probably the most important component of the overall shry. Focus on the possibilities of the computer and try to squeeze out all the potentially available resources:
- SHADING - the presence of shadows on the highway and around it;
- SKY - on-screen display of the sky;
- TEXTURE MAPPING - five modes coloring degree of individual picture elements;
- SCREEN RESOLUTION - installing graphics resolution.
This option is just the trouble lies:
320x200 with 256 colors - this is, of course, good. But the charm of the program you will not see;
640x480 with 256 colors - perfect, affordable, unfortunately, only «Pentium», even with a fast video card;
MAIN OPTIONS - returns to the menu OPTIONS.
SOUND OPTIONS - sound system. The level of music and special effects set separately.
REINITIALISE JOISTTCK - initialization of the joystick. COMPUTER PLAYERS - participation in a future race computer opponents with all the ensuing consequences. Otherwise, will race around the track in splendid isolation, fighting only with time.
DIFFICULTY LEVEL - three modes of the overall level of difficulty. This choice depends on a number of factors - the degree of control of the vehicle on steep slopes turns, the reliability of its protection from the enemy's fire, the degree of skill, aggression and bloodlust of your opponents, and more. MAIN MENU - return to the main menu of the game.

Preparing for the race and directly involved in them. You first need to decide on the main - what kind of competition you prefer at the moment:
- CHAMPIONSHIP - the beginning of the new season;
- SINGLE RACE - single race.
Let's start with the latter, as the most simple in the sense of the primary with the game. This is a single "friendly" with a preliminary check the arbitrary choice of some conditions that are not available in the regular season.

Apart from the purely subjective factors, such as skilful driving and accurate shooting, the success of «Hi-Octane» is defined and three technical components - a timely refueling, reloading weapons, and the presence in the arsenal of ready-to-use system of turbo boost. Without them, not that defeat even reach the finish line is almost impossible. Location maintenance items indicated by traffic signs placed along the edges of trails in the immediate vicinity of the respective objects or next to them. They are the shields of different colors to put on them with special icons:
- Blue - fueling (silhouette gas station);
- Yellow - reload (contours gun);
- Green - repair of protection (a shield). These signs are mounted directly to the respective technical areas.
Those boards, but with the right and left arrows indicate the shortest access roads to these points on the road and are located, respectively, at a certain distance.
Activation of all three modes is done automatically at the time of the direct drive past the technical points. Slow down the speed and slow down when not needed. Despite the availability of technical services at each track services provided there is still not enough for a full-fledged fight. Therefore, the organizers of the competition liberally sprinkled along the route options are refueling, recharging and repair. These unique awards are three different configurations. Triangles increase the power of the systems of ten standard units, diamonds - a hundred, hexagon - by two (corresponding to the number applied to each prize). Prizes blue - emergency refueling fuel, yellow - to replenish ammunition minipushke, green-circuit board repair.
In addition to them on the track and you can pick up prizes in red:
diamond with six black dots will increase capacity guns, hexagon with a silhouette of the rocket will increase the number of missiles in your ammunition, and the diamond with a white arrow will add energy system, turbo boost.
All this equipment is strategically imperative, as save you from arrival to technical points, sometimes located in remote "sleeves" track. Thus you will save significant time passage of the next steep. Furthermore, sometimes even prizes should be selected at the expense of speed, turning on those portions of the route which is directly on the track, nevertheless located away from your shortest path of motion (for example on the outer edge of the turns in short or sidings).
If you foolishly tear down the embankment and overpass and thus have lost some seconds, all the more so look around - on the roads, too, can be a lot of things worthy of your attention.

This option opens a new tournament. In the list of drivers you will be registered under a name entered in the last time in the previous menu.
Championship itself is consistently walkable from one track to another series of races in which you must, at a minimum, to survive and get to the end, to be eligible to participate in the following. However, even here there is a difficulty. Pass to the next round only in the event that will occupy space on the top lines of the summary table. Otherwise, all have to start from the beginning. In contrast to the single race in the championship you are unable to choose the order of passing tracks. They are strictly defined rules of the competition. Also, as the number of rounds to be held in each race.
Tournament starts with the first track of the order «AMAZON DELTA TURN PIKE», the length of eleven laps.
Selection of machine and the command that you will act championship, similar to the corresponding modes in the SINGLE RACE.
Then - the start and the fight for sure a high place on the podium.
At the end of the race summary table shows the technical results of the just concluded-in, where:
- HIT ACCURACY - accuracy (in percent);
- KILLS - the number of destroyed your opponent cars;
- DEATHS - the amount of your broken machines;
- AVERAGE LAP - average lap speed;
- BEST LAP - the fastest lap time;
- RACE TIME - the race;
- RATING - your overall rating;
- POSITION - the space used in the race.
POINTS The following table shows the number of points gained by all participants in advance. In the first place is awarded 20 points, second place - 16, for the third - 13 Further, respectively.
And, 9, 7, 6, 5.
The overall results after a few races are in the table CHAMPIONSHIP TABLE. This specifies the total number of points earned by drivers in all previous races, and, depending on the amount, location, on which the applicants.
If the (track) you passed successfully, the following menu will contain a new championship option - CONTINUE CHAMPIONSHIP. It will allow you to immediately continue the championship. However, it is better to record the current state of the game to disk option SAVE CHAMPIONSHIP, and then proceeding to further procedures.

Regardless of the machine, your machine is controlled by exactly the same.
UP - acceleration.
DOWN - brake.
LEFT - left.
RIGHT - turn to the right.
Z - shooting minipushki.
X - rocket salvo.
With the - enable turbouskoriteli. detail.
1 - view of the road from the cockpit.
2 - view of the car from above.
3 - view of the car from top to rear.
4 - view of the car with a top-to-back distance.
With all the above modes of management is carried out in full. These indicators and displays are present on the screen, allowing you to navigate through all the nuances of race and performance of your machine.