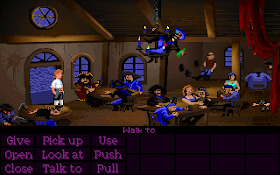 Genre: Adventure
Perspective: 3rd-person
Visual: 2D scrolling
Gameplay: Graphic Adventure, Puzzle elements
Interface: Point and Select
Setting: Fantasy, Sea Pirates / Caribbean
Narrative: Comedy
Published by: Lucasfilm Games LLC
Developed by: Lucasfilm Games LLC
Released: 1990
Platforms: DOS, SEGA CD / Mega-CD
Game «The Secret of Monkey Island» game became the fifth through the engine, SCUMM. Fathers of this game became the game designers Ron Gilbert , Tim Schafer and Dave Grossman.
Originally the game was released in 1990 on floppy disks for Atari ST, Macintosh and PC ( with EGA- graphics ) . A few months later, the game was re-released for PC with VGA. And in June 1992 came CD- version , which includes music with improved quality and the drawn elements stock ( in previous versions of inventory was completely text ) . Originally planned to use 12 verbs with which the player can interact with the game world , but in the CD- version of their number was reduced to nine .
July 15, 2009 the company released a remake of LucasArts game called «The Secret of Monkey Island: Special Edition» with updated graphics and music and totally saved plot. Unlike the original remake all the characters sounded , and the main characters of the saga scoring performed by the same actors as in the game «The Curse of Monkey Island»: Guybrush - Dominique Armata , Elaine - Alexandra Boyd, LeChaka - Earl Boen . Remake was released simultaneously for PC, Xbox Live Arcade and iPhone / iPod touch. Interface has changed - the list of verbs and equipment were hidden demand . Among other things, the game introduced a three-tier hint system . In essence , the new version includes the original game , so you can instantly switch between the original and the remake. You can do this at any time without disturbing the gameplay , but it in the original mode, the player loses all innovations , including voice acting.

The game begins with the fact that the man with the unpronounceable name of Guybrush Threepwood, who wants to become a pirate , appears on the Caribbean island of Mêlée Island.
Three pirate leader appointed him three tasks - find the treasure to steal the idol of the governor's mansion Island Elaine Marley and win the duel Master Blade . 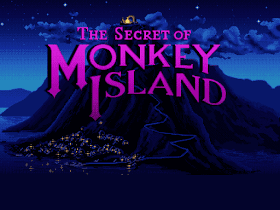 However, as soon as Guybrush performs the third task , the pirate ghost LeChuck kidnaps Elaine and takes her to Monkey Island. Guybrush , at that time involved in a romantic relationship with Elaine , gaining a team of three people , buying from a dealer of second-hand ships and ship Stan goes in search of the mysterious island in the hope of saving the governor.
On Monkey Island , Guybrush meets once shipwrecked hermit named Herman Toothrot, and detects settlement vegetarian cannibals who help him find a remedy against shadowy team LeChuck.

F1, Esc - exit the menu .
H - help ( set in the settings menu ) .
V, Ctrl - action ( open menu with different actions ) .
Or English letters on the keyboard (you have to move the cursor to the subject ) :
O - open
U - use
P - take
S - push (push )
Y - pull ( over )
C - close
L - explore
G - give
T - talk
Using objects - first you need to select the action to the object , and then open the inventory and select the desired item left mouse button.
Right mouse button - the default action (indicated in the lower right corner of the screen ) .
I, Alt - call inventory.

In the Caribbean, there is a real monkey island - an island of Monos ( in Spanish - "monkey" ) .
So tongue- name protagonist got thanks to head designer Ron Gilbert . File with the first sketch for the moment nameless protagonist was named a guy with the extension by default in the graphical editor DPaint - brush. And got the name - «guy.brush». And the name Threepwood was chosen through a competition conducted among game developers .
Mêlée Island island name comes from the French word mêlée ( Fr. melee , sharp dispute ) .
In a bar called SCUMM sits scowling pirate icon "Ask me about LOOM». If you ask him, he starts to quicken and enthusiastically promote the game LOOM, LucasArts released in the same year . Pirate himself is a character of the game Loom, Assistant Bishop Mandible named Cobb.
Here are some of the leaders of the famous pirate pirates drink :
Grog - is classified mixture comprising one or more of the following ingredients :
Such a recipe is a parody of the Coca-Cola recipe stored in strict confidence.
Red dye number 2 (E123) as a carcinogen.
One of the most famous jokes, which the user receives an error in the program , was the situation when Guybrush Threepwood in search of treasure in the woods finds a stump in which there is a hole leading " down into the cave ," but when you try to get into her messages appear consistently recommending inserted into the disc drive 22, 36 and 114. Guybrush then uttered the phrase, " What a pity . It seems to me there is not down . Will miss this part of the game . " Also mentioned in the credits is responsible for graphics and animation for the disc 22. Since the game was produced by four ( or eight) diskettes , tech support LucasArts caved phone calls from customers stating that they sold an incomplete set of games and demanding to compensate the shortage . This joke was understandably removed from CD-version. In the second part , Monkey Island 2 : LeChuck's Revenge, Guybrush can call tech support company LucasFilm Games and ask , "Who is this stupid joke to stump up? " To which the operator replies, " I'm tired of hearing about this bloody stump. You can even imagine how many calls I have per day on this stump ? And stop asking me about it . " Chester also of LucasFilm Games Support may ask : " So what's the secret of Monkey Island ? ". And in the third part , The Curse of Monkey Island, in the family vault there Gudsupov crack prosunuvshis which , Guybrush finds himself in a dark forest , looking out of a hole in the first game familiar to the stump .
Game «The Secret of Monkey Island» has become the only game of the series Monkey Island, in which the main character can die. At a meeting with the leaders of the pirates on the question of special skills Guybrush meets that can hold their breath for ten minutes. Later , when he was thrown into the sea with a rope tied to the idol , he finds himself at the bottom strewn with all sorts of cutting instruments , to which, however, Guybrush is unable to reach. If you wait ten minutes , it will begin to turn blue and eventually drown , the game will start again (or load a previously saved ) .
On Monkey Island , Guybrush could fall down a cliff . When this dialog box appears , prompting you to reboot, re-start or exit (this message repeats what has been used in quests Sierra On-Line in the death of a character ) . However, a few seconds later Guybrush jumps back to the rock , unhurt , explaining that fell on the " rubber tree ", and the game continues . Sierra has not left unanswered gag , making this puzzle game Castle of Dr. Brain ( 1991), wherein in one of the corridors rubber tree stands . Clicking on it , the player gets a comment : " rubber tree . Can be useful if you fall off a cliff . "
"Look , behind you! Three-headed monkey! " - A common way to get away from the enemy during battle. Later it became an expression through a joke for the entire series Monkey Island. It also has been used repeatedly in the other game from LucasArts - «Day of the Tentacle». However, the game «The Secret of Monkey Island» Guybrush meets a three-headed monkey do and can even talk to her.
"This is a banana in your pocket , or are you just happy to see us ? " - Pronounced cannibals met Guybrush carrying a banana in your pocket . This is a reference to the famous Mae West joke .
In one of the screen savers that show being on the high seas ship , clouds take the form to the right of the skull.
Going to church, Guybrush loud shouts the name " Elaine ! ". This is a reference to the movie "The Graduate " in which Dustin Hoffman's character was doing the same thing.
In the kitchen there is a portrait SCUMM bar mascot firm Pillsbury Company.
Herman Tuhrot hermit of Monkey Island , was named in honor of the British rock band of the 1960s Herman's Hermits.
Before the giant monkey head sticking out of the sand you can see the silhouettes of the idols of Sam and Max , the main characters of the game «Sam & Max Hit the Road». Since LucasArts company sold the rights to the characters of Sam and Max in 2005, for the publication of Special Edition idols Sam and Max replaced by idol Tentacles of the game «Day of the Tentacle». Also under the island , at the ghostly image of the ship can be seen Manny Calavera from Grim Fandango.
‹
›
Home
View web version