The Secret of Monkey Island (SEGA-CD) 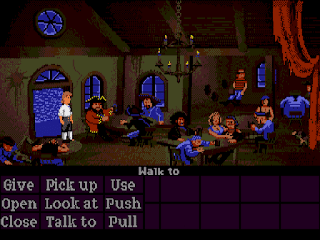 Genre: Adventure
Perspective: Side view
Visual: 2D scrolling
Gameplay: Graphic Adventure, Puzzle-solving
Interface: Point and Select
Setting: Sea Pirates / Caribbean
Narrative: Comedy
Published by: JVC Musical Industries
Developed by: Lucasfilm Games LLC
Released: 1993
Platforms: SEGA CD / Mega-CD, DOS
Excellent quest from a well-known developer. The first of a series of Monkey Island.
The action takes place somewhere far away in the Caribbean, on the island of Melee Island run by Governor-girl Elaine Marley. In her, the cruel pirate-ghost Lechak fell in love with her. At this time, a new character appears on the horizon - Guybrush Tripwood - a boy with a strange name, but desperately eager to become a pirate. In the bar on the island, Guybrush asks three old, respected pirates to help him become like them. They give the daredevil three tasks: to find treasure, to steal treasure from the mansion of the governor and to fight with swords with the Master of the Blade. But as soon as Guybrush completed these tasks, the ghost pirate kidnaps Elaine Marley, to whom our shooting is no longer indifferent. The hero immediately assembles a team, buys a ship and sails to the Island of the Apes - where Lechak took the captive. Well, then you will learn everything from this wonderful game.
And it is a port of a specific (but well-known) engine Lacas Arts - SCUMM. And this is a full-fledged quest, with all the riddles inherent in it, logical and illogical decisions. The game has a lot of humor and hidden interesting facts (for example, the situation with a stump in the forest).
It is a pity that the color palette is expressed only in dark colors, unlike any other ports.
‹
›
Home
View web version