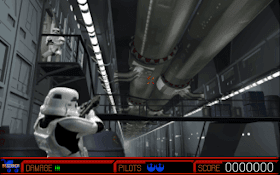 Genre: Action
Perspective: 1st-person, Behind view
Art: Video backdrop
Gameplay: Arcade, Rail shooter
Vehicular: Flight / aviation, Space flight
Setting: Sci-fi / futuristic
Published by: LucasArts
Developed by: LucasArts Entertainment Company LLC
Released: 1996
Platforms: DOS, PlayStation (PSX, PS1)
The game, which will be discussed in this chapter, was one of the most anticipated programs of 1995 and it is no coincidence. «Lucas Aits», releasing in 1993 the first part of «Rebel Assault», literally conquered the most refined of all the graphics, the abundance of high quality (at least by the standards of 1993) video, interesting story and lots of various levels. No coincidence that «Rebel Assault» then became one of the most popular games of the year. 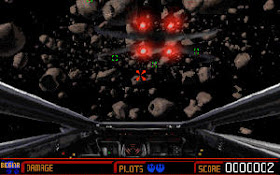 However, in the old game were some very unpleasant moments spoiled the blood of many gamers. The main drawback of the first game - the inability to save the current position after the mileage level. Accepted lives, you have to start the whole story from the beginning. Given that the game was very difficult to pass, in principle, all this could not annoying.
However, do not let the bad, and move on to a new subject. We note at once, everything that you come across, logically built in a two-part feature film, in which diverse gaming scenes are not simply related scenes with live actors, and each successive story follows logically from the previous one. As a result, the picture turns very cohesive, not breaking up (as it often happens with other games) on a simple set of arcade fragments. This, in our opinion, the main artistic merit «Rebel Assault II». For example, after the first successful battle (THE DREIGHTON TRIANGLE), you stay alive and continue the flight along with his partner. However, fall under tight enemy fire. Your partner is dying, and you, at the last moment to catapult to find yourself in the desert, close to the underground imperial base. Fight to the stormtroopers in the premises station (THE CORELLIA STAR) need to destroying the enemy to get to the fighter who is in the hangar. The next chapter (MINING TUNNELS) - flight on this machine by an eerie underground mines, etc. Everything is connected and smooth transition from one "stories" to another. On a purely gaming qualities about them at a special subject, the benefit of the new game has a lot of new products and the interface, and in terms of recording levels, and in terms of editing the degree of difficulty.
Now, first things first.

In general, the meaning of the story of "Star Wars" is the following. The rebels, destroying the Imperial cruiser "Death Star" have proven that they can solve the most seemingly impossible tasks. But, of course, in the confrontation between the forces of good and evil was too early to put a point. Darth Vader and the Galactic Empire did not give up. Moreover, by using a new, more modern weapons, they made every effort to ensure that once again beat the rebels.
In this situation, you and step into the fight as a starfighter pilot of the rebel forces. Since its way neobstrelyannogo rookie, you consistently go through 15 game scenarios, each of which is original and different from others. There will battle with armadas of imperial fighters in open space, and suicidal missions in the maze of narrow, pedestrian and "walk" on the surface, controlled by Imperial stormtroopers, etc., etc. In each mission is the highlight, but the most difficult, in our opinion, are traveling through the narrow maze, every collision with walls which causes significant damage to the body of your vehicle, quickly bringing it into complete disrepair and making again and again to start the episode again. If you manage to pass all the subjects to the end, the plans of the Empire will be destroyed, and the rebels would win another victory ...
After starting the game, you immediately find yourself in the main menu start.

START GAME - beginning of the main game (see below).
- OPTIONS - setting some specific options:
MUSIC - turn on / off the background music;
VOICES - enable / disable the speech of characters;
SFX - turn on / off sound effects - explosions, gunfire and so on;
TEXT - enable / disable subtitles;
CONTROLS - switch management options "up-down" to the other (for the levels on the technique of flight)
- NORMAL - Normal Mode (press DOWN corresponds to lift the ship up, UP - down. Joystick - the handle itself - up from himself - down);
- FLIPPED - on the contrary.
- RAPID FIRE - Enables the automatic firing.
- JOYSTICK SPEED - the speed at which the joystick responds to your commands.
- BRIGHTNESS - the brightness of the screen.
- RETURN TO MAIN MENU - return to the main game menu.
CALIBRATE JOYSTICK - calibrate the joystick.
CONTINUE INTRO - if you cancel the preview clip precedes the main action, this option will allow you to watch it again.
SHOW TOP PILOTS - a list of the fifteen best drivers in the game, where:
- RANK - military rank assigned as you progress through the story;
- NAME - name of the pilot;
- DIFFICULTY - level of difficulty, which was shown to result worthy of getting in the top list;
- CHAPTER - how many chapters (episodes) of the game passed to the pilot;
- SCORE - the total number of points scored.
SHOW CREDITS - Information about the creators of the game and the actors who played the main role.
RETURN TO LAUNCHER - back to the start menu.

Beginning of a new and each subsequent games.
The first thing you have to do is to take its place in the list of pilots «Rebel Assault II».
ADD NEW PILOT - Pilot choice. First on the menu DIFFICULTY LEVEL determine at what level of complexity are going to play. Four plus two options you have created manually (see above). This is the fundamental pre-game moment, because of it will depend largely on how quickly you can move up the script and go up in rank. Confirm with the ENTER, you return to the previous menu. The selected level of difficulty will be a temporary name of your character. To enter a new key BACKSPACE delete written and type the desired result. Using a specific pilot, all his achievements are stored with the transition from the completed scene to the next. So, if you stop the game by the same name later, you come back to continue the fight from the place where you left off last time. In addition, if the results shown in any of the completed script for any reason you are not satisfied, you can return to this subject and try to beat him again in order to improve the bottom line of "health" or account. These new results will be copied over a previous attempt.
DUPE PILOT - used to have multiple copies of the state of the same pilot (later to safely replay episodes and always have thus recorded and untouched version). To copy the current state, select the appropriate name from the list and press ENTER. A copy will remain in the list of pilots marked COPY.
DELETE PILOT - remove the player from the list if the result you are no longer interested (functions similarly to DUPE PILOT).
"Sheet" list of pilots, you draw on the screen (in the lower left corner) the level of complexity and the number of episodes that will play this player.
Having defined the player by pressing ENTER you go to the menu CHAPTERS. Structurally, the game is built around the same way as, say «Creature Shock», - after the passage of the next job, you get access to the next, but you can play if you want any of the already passed ... Thus, a linear lined up one behind the other scenes you get to the end. However, if an episode is not you in the teeth, you can skip to immediately go to the next scenario. However, the program writes UNREGISTERED - that is, the previous episode was not performed and, accordingly, is not registered. In order to proceed, you need the password of this level - PASSCODE REQUIRED (but it - only for very very impatient as having at hand the difficulty level editor, it is possible to play the game by yourself without the help of codes. Only then will you get from playing those the feeling that it is worthy).
Anyway, place the cursor on the name of the next episode (in this case the bottom line will show information about the number of lives you have left - PILOTS, glasses - SCORE and military rank - RANK, mined on the battlefield). Press the fire button and proceed to the execution of the next job.
After the end of the mission (successfully, of course), there is the final statistics menu, which lists all your major feats - namely, the accuracy, the total score, bonus points, etc. (Depending on the nature traversed episodes). At the top of the screen, under the word CHAPTER COMPLETE password is displayed tolerance to the next level (though you'll need it only if you play on a different computer).
In the course of the mission at the bottom of the screen is the most important statistical information that provides the ability to control the game.
Left to right:
- The level of difficulty;
- DAMAGE - the scale of current health damage to a ship or a hero. The absence of markings indicating 100% survivability. The green mark - damage, red - the critical level. Caption WARNING - a state as close to death;
- PILOTS - the remaining number of lives you (goes with you from level to level). There are only four lives - the first original and three additional in the form of silhouettes of ships. After losing the last life, you end your current game, but can always play it from the beginning of the episode, which was your last;
- SCORE - the total score, the number of points you from the start.

As already noted, the game is controlled by one of three devices - mouse, joystick or keyboard. Choosing the right depends on the nature of the next episode.
Keyboard
The sight and movement are carried out using the arrow keys:
UP - up the nose of the ship, the sight - down (for space combat);
DOWN - down bow, sight - up (for space
battle).
In ground combat operations:
UP - sight up;
DOWN - sight down;
LEFT - left;
RIGHT - right;
CTRL - shooting;
ALT - to increase the speed of the cursor on the screen;
SHIFT - additional action (say, to hide in the shelter, see below).
Mouse
- The movement by moving the mouse.
- Left button - shooting.
- Right Click - additional action.