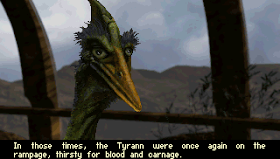 For many generations, the peaceful inhabitants of Eden have lived in fear of the tyrant, Moorkus Rex. With his bloodlusting hordes of rampaging Tyrannosatirs, Moorkus Rex has mounted a terrible campaign of destruction against the human and dinosaur races. His ultimate goal is domination of Eden.
YOUR ultimate goal is to prevent his aggression and end his reign of fear forever.
In the game, you are Prince Adam of Mo, heir to the throne of the kingdom of Mashaar. You are ambitious and courageous, anxious to begin shaping the future—shaping not only your own future, but that of Eden. And foremost in your mind, is the need to defeat Moorkus Rex. Your father, King Gregor, is an old man with little fighting spirit left to face the I yrann leader. His own vision of the future is bleak. He believes that nothing can prevent Moorkus Rex’s ultimate victory; and it will simply be a matter of time before the Tyrannosaurs conquer Eden. You respect your father, but you do not share his grim vision of the future. You believe that, with help, you can defeat Moorkus Rex and his army.

The game begins on the day of your Coming of Age. Ever since your mother and your sister were murdered by the Tvrann on the plains of Mashaar, King Gregor has forbidden you to leave the safety of Mo. As you are the last surviving heir to the throne, you must not be exposed to the unnecessary dangers in the world outside. But you long to leave Mo and see the magnificent lands of Eden with your own eyes. You do not share his pessimism and are determined to halt the fyrann wave of death, before it is too late. You already have a formidable defense to use against them...
Your home—the great citadel of Mo—is an impregnable fortress, which will never be stormed by the Tyrannosaurs. But while your own subjects are safe in Mo, the Tyrann’s rampage through the surrounding lands, killing and enslaving your would-be allies: the other races of human-types and the peaceful dinosaurs.
In vour dreams, you have foreseen an end to this destruction. A future free from the tyranny of Moorkus Rex. You have great heroic ambitions—ambitions to unite the humans and dinosaurs as allies against the Tyrannosaurs. And you have a plan—a plan which will persuade the others to rally to your cause. If you can build citadels like your own at Mo, in the valleys where the other human-types live, they will be safe from the Tyrann attacks. With a network of such citadels across the land, there will once more be hope for the future. Convinced of your noble intentions, others will rally to the cause. With the rest of Eden allied against them, the Tyrann will surely be defeated.
There is only one problem...
The great secret of the citadels has been lost!
Your great grandfather: Priam, known as The Architect, built the Citadel of Mo. This gargantuan fortress defies all known laws of construction.
Its very existence is an enigma—a source of wonder to all who behold it. How could The Architect have built such a structure?
But alas, this great secret has been lost in the mists of time. All knowledge of its construction was purged from history by Priam’s own son,Vangor, a cruel warlord who sought a treacherous alliance with Moorkus Rex. Vangor, who became known as The Enslaver, had all who had been involved in the citadel’s construction put to death to prove his intentions.
Sincerely, you believe The Architect’s great secret can be rediscovered. Therefore, your mission has two stages. First, you must rediscover the great secret. You must learn how to construct citadels like the one at Mo. And then you must visit the valleys of Eden. In each valley, you must build a citadel to defend the inhabitants from the Tyrann. You must also persuade these inhabitants to become your allies—to join with you in a campaign of war against Moorkus Rex and his legions of death.

Controls - it is two control strips (top and bottom edges of the screen), between which a game window, and cursor. It has two main forms: a hand - to select the elements of control strips and magic cube - to perform an action movement, talking, "grasping" and viewing. Depending on the action potential in a given situation or in relation to the object, the image changes on the faces of the cube: Local traffic - large triangular arrows, one on each side (if the movement is not possible in the desired direction - blank faces of the cube). Clicking the left mouse button stops the animation box. Calling cards for onward movement - two narrow arrows, two on each side. The conversation - the human figure. Click on a character to begin the dialogue. Clicking on a character in the dialogue skips to the next "portion", aside from it - stop dialogue. "Grasping" - palm of the hand. View - The Eye (the cube starts to pulsate).
The lower control band - this is your "basket", which are added to the results obtained and gift items. When you select the object to use the cursor changes to its shape. Reusable items must be returned in the "basket" to restore the normal cursor shape.
The upper control band reflects your location and your companions figures. When you are in the Valley of the name of a place apart (left) map appears Valley (right). The map shows your position (black cross) you encountered herds of dinosaurs (red cross) and place of construction of the fortress (yellow cross). Clicking the mouse on the map leads to the exit from the Valley and access to the card for long-distance moves. A mouse click on a window with figures gives you a view on the part of your company. In this mode, you can talk to your companions and give them the necessary items from the "basket", to use magic items (taking them and clicking on the image of Adam), and to access the main menu of the game. Enter and exit this mode, you can also use the right mouse button.
In the main menu you can:
- Enable / disable captions dialogues in one of three languages ​​SUBTITLES. To enable subtitles during the opening sequence, edit Eden.bat, which will create an installation program as follows:
- Default: edenprg amr s .......
- Fix for: edenprg eng s ........
- Adjust the audio settings and check their MIXER TEST;
- Load one of the saved games LOAD;
- Save the current game (maximum of three games) SAVE;
- Complete the game QUIT;
- Start over RESTART;
- Return to the game RETURN;
- View recent conversations TAPE.

After an introduction from Eloi the Messenger, the game begins. YOU are Prince Adam. It is the day of your Coming of Age. But it is not a day for celebration. Your father is about to learn of the latest strike by the Tyrann. He has summoned you to the throne room. As you share the terrible news with him, your determination grows. You must find a way to defeat Moorkus Rex!

The Citadel of Mo

The adventure begins in the Entrance Hall of the magnificent Citadel of Mo. You will need to find a way down to the inner sanctum of the citadel, where your father awaits you. Explore the citadel and meet its inhabitants: Eloi the Messenger, Jabber the Executioner, Thugg the King's loyal sergeant-at-arms and Monk, your father s wise Chancellor. Your first mission must be to rediscover the great secret of citadel construction. Has your great grandfather’s secret been lost forever? Or can you solve the mystery and learn how new citadels can be constructed to defend the other races against Tyrann attacks?

If you discover the secret of the citadels, you can leave Mo. Find your way back up to the Entrance Hall and leave through the main entrance gate. Once outside, you will want to travel through the valleys of Eden, sharing this secret with your allies and initiating the construction of your defenses against the Tyrann. Leave the citadel by pressing the A button on your controller anywhere in the sky. The cursor changes to a chevron for long-distance travel. You will meet many strange.creatures and mysterious races of human-types. You must win them over and persuade them to rally to your cause. Many will join you on your journey. You will also discover many enchanted relics and deadly weapons, which you can use against the Tyrann.

Moving in the Valleys

To leave a valley, get back to the Aerial View (press the A button on your controller on the Plan Map) and press the A button anywhere in the SKY beyond the valley (top part of screen). Eloi will ask you where you want to go, and will follow your instructions according to where you have moved the cursor and pressed the A button.

Before you can build any citadels, you will have to discover The Architect’s Secret within Mo itself. Once you know this, you will realize that you need help to build citadels. Help can be bought. But you must discover how and from whom.

If you fare well on your quest, you will face Moorkus Rex himself.
There is only one way to defeat him. You will have to discover this, too. You can bypass sequences of speech or animation by pressing the A button on your controller while they are playing.

If you have already been given Tail's shell, you can use it for advice when you get really stuck. To use the shell, simply go to the Companions Screen, then pick up the Shell and, using the direction pad to move the cursor, click it on Adam by pressing the A button on your controller.

If You Have To Leave A Game

While in a valley, the dinosaurs are not necessarily safe from a Tyrann attack. Because this is a real-time adventure and you have to leave the game, go to the Options Screen and save the game. When you return, you should re-load the game as described in the section “To Load A Game”.