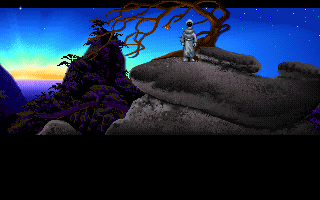 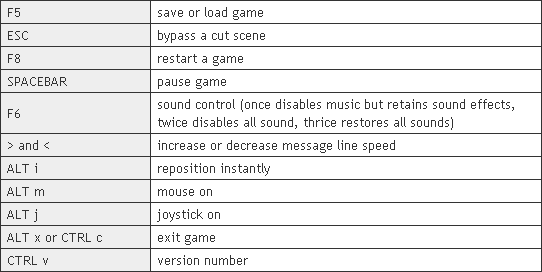 Background to the game is described in a thirty audiodrame that came on audio cassettes complete with the original versions of the game . It tells the story of the era of the Great Guild , when people tried to establish his authority over nature.
Each of the guilds began zealously guard their secrets , hiring armies to protect their interests. But some of the guild were not so ambitious. Members of the Guild of Weavers chose to upgrade their skills instead of having to fight for power and might . Thanks to the skills and talents of weavers products has been very valuable and popular. Soon the garments of their tissues began to be famous for being the enchanted - some cured of illnesses , some saved from misery.
Over time, the art of the Weavers surpassed the physical world . Instead of flax and dyes they used light and music , weaving new patterns in the fabric of reality. Outsiders saw it as witchcraft, and Guild members were persecuted . In the end, they had to buy the remnants of its former wealth rocky island Loom and settle on it.

The centuries-long isolation from the rest of the world has transformed the once thriving guild weavers in a small community consisting of several dozen people. Marriages with other guilds were not welcome , and the profession Weavers degenerated . After giving birth to a stillborn child , Cygna Threadbare of resentment toward the elders of inactivity and blind adherence to tradition wove into reality with the help of the Loom baby - Bobbin Threadbare. Fearing the prophecy says that the son of the machine will destroy him, and after him - and the whole material world , the elders expel Ledoux , turning her into a swan and forbidding to set foot on the island. Bobbin give himself to the education of Hetchel, while denying it to teach the skill of the Guild. However hackle secretly teaches him the art of weavers to weave the threads and patterns in the fabric of reality.
In the seventeenth day Bobbin elders urged him to come to determine his fate . But after they are punished by hackle pattern "Transfiguration" , suddenly arrives swan and imposes the same pattern for all the inhabitants of Lom , turning them into swans and leaving Bobbin alone. Now he has to find these swans and join them. During the trip, Bobbin meets the ambitious Bishop Mandible of the guild cleric booked for a future army in the guild glassblower scope predictions the guild Shepherds - one hundred thousand well-fed sheep , while the guild - ten thousand swords. His last goal is to stick Weaver , who will help break the thin fabric of reality and to call this world of the dead and become the ruler of the remaining survivors. However, after the fabric has been torn apart , with the dead came into the world and Chaos, which has its own plans for world domination.
Having regained his staff, Bobbin off after the chaos , trying to prevent the destruction caused by them . The only way out - to destroy the Loom and divide reality into two halves, in which good and evil are separated by an insurmountable obstacle . By doing so, Bobbin turned into a swan , and join the rest of the weavers , forever leaving the material world .

In the game there is no interaction with objects in the familiar classic quests . To work on the subject , it is necessary to impose an appropriate pattern . To create a pattern that will influence reality , it is necessary to cast a spell , consisting of four notes in a certain order . Each pattern may affect the particular object in a certain way . For example, the pattern "Open" can open the doors , and the heavens ( and then cast down lightning) . Spell spoken by contrast, produces the opposite effect - for example, the pattern " Awakening " , woven in reverse, forcing the victim to sleep soundly . Some designs are only one purpose and may not be pronounced vice versa ( for example, " treat ").
Initially Bobbin are only three of the eight notes , but with the growth of knowledge about the world and the passing game he become available the rest.
The game has three difficulty levels , with the most difficult in the preparation of patterns player can only rely on their hearing - tips about the notes not. However, for their patience will be rewarded with a player a few extra scenes that do not exist at other levels of complexity.
Since LOOM, LucasArts introduced its paradigm , according to which the player must not fall into a stalemate or die , being in the wrong place. The manual was devoted to this principle, a separate section explaining the approach and distinguishes it from other adventure games (mostly implied main competitor - Sierra On-Line, which is often misused such methods , forcing the player to repeatedly pass the game after a single error).

Originally the game was released on floppy disks for EGA (16 colors) , which was later ported to the Amiga, Atari ST, Macintosh and TurboGrafx 16. A year later came "improved " 256- color version for FM Towns on CD, containing in addition to improved graphics and a soundtrack to the game ( 8 tracks of classical music). Just a year later, VGA- out version for the PC, which, however, was different from the previous one : it voiced dialogue, but the soundtrack and dialogues themselves have been cut , and a number of close-up images of heroes there, even though the resource game, they are still present.
It should be noted that in the 256- color version more " realistic " image contradicts the original graphic concept of the world , woven as a tapestry on a loom .

References to the game