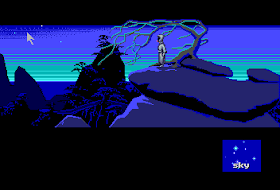 Genre: Adventure
Perspective: Side view
Visual: 2D scrolling
Gameplay: Graphic Adventure, Puzzle elements
Setting: Fantasy
Interface: Point and Select
Published by: Turbo Technologies
Developed by: LucasArts Entertainment Company LLC
Released: 1992
Platforms: TurboGrafx-CD (PC Engine), DOS
90x - the era of quests. This time when Lucasfilm Games were not yet Lucas Arts, and their gaze was directed not only towards their main brainchild - Star Wars. In those years they did chic quests. They are Monkey Island, Sam & Max Hit The Road, Full Throttle and of course Indiana Jones. We will talk about many of them in future issues. And on the agenda we have - Loom.
This is not a game - it's a quest. Although no, not even a quest. This is a very beautiful fairy tale about the eternal. About good and evil.
The main difference between this quest and the others is that the objects in the game play notes. Depending on the sound of things, the magic staff shines with a certain color. Each color corresponds to a certain note. Thus, by repeating sounds with the help of a staff, we can act on objects in different ways. But everything is not so simple, as it seems at first glance. This unit gets to the main character by a lucky chance. A staff we will have to do everything. That is, absolutely everything, whether it's opening doors or controlling the flow of water.
Often before us, there will be occasions when it will be necessary to apply a "reverse" spell to get the desired effect, just play the notes in the opposite direction. Interesting find, nothing like the other games I have not seen, and you? Also unusual is the fact that in quest-adventure there is no inventory. All would be nothing if this innovation is over. But no, the developers went further and saved us from the branched system of dialogues, which is also nonsense in games of this genre.
The game takes place on the small island of the Weavers Guild - Loom. Above the guild is a threat of degeneration, caused by the prohibition of marriages between representatives of other guilds. Once, one of the weavers after unsuccessful births, decided to create a child with a magical loom, even if the prophecy was that such a child would destroy the world.
Later, when the elders of the Guild learned of this, they turned the weaver into a swan and forbade them to live on the island. The child was decided to give another weaver, but on the condition that she would never teach Bobbin (that's the name of the main character) to the weaving craft. Apparently, this child was destined to go against the system, both before birth and after. The stepmother also decided to break the prohibitions and taught Bobbin to weaving, for which she was to be punished. While the elders were choosing the type of punishment, a swan flew into the courtroom and turned everyone who was there into their own kind into a song. Thus, our hero remained on the island alone. From this moment we enter the game.
Such a frequent mention of swans is due to the main musical theme - "Swan Lake" by Tchaikovsky. According to the developers, it was the music from the ballet that inspired them to create this masterpiece. It is interesting to play a quest that combines modern technology and classical music. By the way, the quest itself can already be considered a classic and a work of art.
In Lucas Arts, of course they understood that they make the game unique (there are no analogues so far!), And therefore immortalized it in other projects, by the way, also no less significant and grandiose.
The bishop's assistant in The Secret of Monkey Island advertises the game in the tavern using the "Ask me about Loom" sign. A Scarecrow of Chaos can be found in Indiana Jones and Fate of Atlantis. So that. Longtime rivals in the name of Sierra On-Line also did not miss this fact and sarcastically hinted about it in their Space Quest 4. It has a CD with the game BOOM, which they describe as "completely devoid of interface and any kind of dangers, a short game , in which you do not have to do anything - BOOM just turn it on and watch it. "
This attack, however, not without reason. Not only is the game criminally short and goes through two or three hours, so it's also quite easy, except for a couple of places where you can get into a dead end that developers have not foreseen. However, for special connoisseurs, there is a Hard Mode mode, many clues will disappear in it and it will be necessary to sweat to reach the victorious end, to enjoy the final credits, and additional minutes of the game appearing only in this mode.
On the one hand - it's still a game, not a movie, where you sit and just watch the development of the plot, not taking part in it. On the other hand, just forget that this is a game, and you need to do something about it. It is so imbued with magic that there is nothing left but to believe in everything that is happening. Sit down, close your eyes, take a deep breath and immerse yourself in it, like a sweet dream.
‹
›
Home
View web version