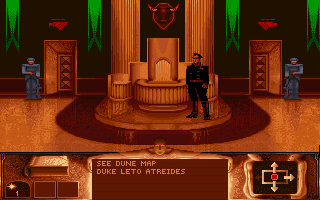 Genre: Adventure, Strategy / Tactics
Perspective: 1st-person, Top-down
Setting: Sci-Fi / Futuristic
Published by: Virgin Games
Developed by: Cryo Interactive Entertainment
Released: 1992
Platforms: DOS, SEGA CD / Mega-CD
The first game based on the story of the novel by Frank Herbert, using images of characters and material from the film adaptation of David Lynch's 1984.
«Dune» was released in 1992 on PC and Amiga, published in 1993 re-release on CD for the PC and Mega-CD. In the re-release has been improved graphics, becoming similar to the version for the Amiga, and additional material from the film by David Lynch. They included fragments of the film, the voice acting for all the characters 3D graphics and improved movement on the planet and locations.

The game's plot basically follows the plot of the novel.
The main character in the game - Paul Atreides, son of Duke Leto Atreides and the Lady Jessica. Emperor Shaddam IV offers House Atreides planet Arrakis - home of spice (spice), occupied by their old foes - House Harkonnen. Duke is in favor - not only for the wealth brought in by the spice trade, but also to win over Harkonnens. 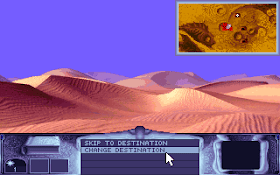 Action in the game takes place with a view from the eyes of Paul. The game is a combination of real-time strategy and the quest. Although the main component is the strategy dialogues between the characters and the story line give the game more depth. The player will also have to complete small quests, interact with other characters and travel the world, which adds elements of adventure.
There should also be a balance between the military forces and the miners spice. The development of a strong army provoke Harkonnen, and the lack of production of the spice tribute to the Emperor lead to the loss of the game. However, if too much time on the extraction of spice, the Harkonnen can attack and capture sietchi fremenov troops inside them prisoner. You can save them releasing sietch. The key to the successful completion of the game - the military balance between the development and production of spice.

House Atreides has no military units or spice miners. At the beginning, Paul must go to the leaders fremenov and convince them to work for him. In the beginning they will agree only on the extraction of spice. After Paul Stilgar will be presented, they also can become the military, on the player's choice. After exploring pours-Kaynzom, tribes can improve the environment in their territories, it is landscaped.
Up to the moment until Paul learns to summon Sandworm, his vehicle will Ornithopter.
Industry and Economy
In each district there is a fortress or sietcha deposit spice (the largest is in great desert in the south). To discover new areas of production, it is necessary to go in search intelligence team. After the spice runs out in one area, it is desirable to move miners to another sietchu. However, the spice of the game is not restored and the desolate land can only be used for military or gardening. Spice is the only currency in the game, which is used for two purposes - pay tribute to the emperor and the purchase of equipment from the smugglers. Duncan Idaho - is a character in charge of the economy, it will attract the attention of Paul for making the payment to Caesar or smugglers.

The game uses some images of characters from the film adaptation of David Lynch (like Paul Atreides looks like Kyle MacLachlan). Some characters that appear in the film, have been using in the game - for example, Shadaut Meyps and Peter De Vries.

Dune was one of the first games that have been translated from floppy disk to the new format CD. Reissue in 1993 for Sega Mega-CD have improved graphics, close to the version on the Amiga, c additions from DOS-version. These included fragments from the films of David Lynch, the voice acting of the characters and the new cut scene.

In 1992, Westwood Studios released a game rival Dune, Dune II: The Building of a Dynasty. Westwood later released another two sequels - Dune 2000 to 1998 and Emperor: Battle for Dune in 2001. Cryo Dune back to only 2001, with Frank Herbert's Dune, which has become their latest project.
‹
›
Home
View web version