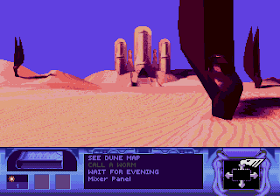 Genre: Adventure, Strategy / Tactics
Perspective: 1st-person, Top-down
Setting: Sci-Fi / Futuristic
Published by: Virgin Games
Developed by: Cryo Interactive Entertainment
Released: 1993
Platforms: SEGA CD / Mega-CD, DOS
The game is based on the plot of the novel by Frank Herbert, as well as on the same film by David Lynch in 1984.
You play as Paul Atreides, the son of Leto Atreides. Emperor Shaddam IV offers Atreides the planet Arrakis, which is a spice - an important substance necessary for interstellar flights and on which the life of civilization depends. But the planet at that time is occupied by the old enemies of the Atreides - clans of the Harkonnens. Your father decides to take the planet and defeat his enemy.
A bit like a hybrid of strategy and adventure. The action takes place with a first-person view. In the game a bunch of dialogues between characters, sometimes you will need to perform small tasks. Basically, you need to maintain a balance between spice stocks and military power. If you develop the army too much, this will provoke the Harkonnens attack. The lack of a spice will lead to a loss (a tribute to the Emperor needs to be delivered on time).
Six languages: French, German, Italian, Spanish, Dutch and English.
The game also came out on Amiga, DOS. It was one of the first games, converted to a CD-version for computers Amiga and PC.
‹
Home
View web version