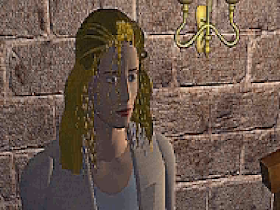 Genre: Adventure
Perspective: 1st-person
Gameplay: Puzzle elements, Quick Time Events (QTEs)
Narrative: Horror
Published by: Acclaim Entertainment
Developed by: Rozner Labs Software Group, Warp Inc.
Released: 1995
Platforms: DOS, 3DO Interactive Multiplayer, SEGA Saturn
This ... Oddly enough, let's say, the game appeared in 1996 thanks to the efforts of the company «Acclaim». What does it represent? On the content of a typical set of puzzles in the spirit of «The 11th Hour», but with a deep tendency to "interactive movie." All the action as it is shown through the eyes of the heroine of the game (although at times the camera watching her, and from the side). All the movements are very smooth and natural. In its content, «D» is a typical horror movie, more frightening, but less intelligent than, say, «Phantasmagoria». For whatever strange reason, then the authors, however, rejected the video, and as the characters appear shortchanged ordinary 3D cartoon characters. They may be bad for a computer skill, but too ugly and ridiculous next to the live video «Phantasmagoria» or «The 11th Hour». 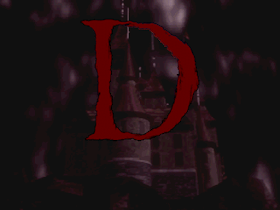 Yes, and more - the game is fully realtime, the maximum duration - two hours from three to five nights. If you do not have time to stay within the allotted time, will have to start from the beginning.
From here there are just three disgusting things:
- Two hours of the game is not worth even a CD, not to mention two;
- Game of the experiences of a horror movie turns into a tense race against time;
- There is no opportunity to enroll.
Remember, if you are late for a moment - will have to pass two o'clock, they say, "from the stove."
Overall, the game in its different aspects is quite a wide range of emotions - from excitement and fear to anger and irritation (this is if you run out of time). Despite these, in general, artificial difficulties, we strongly recommend that «D» to anyone who likes games like «Myst», «Shiver's», «The 7th Guest» or «Phantasmogoria».
In this brief introductory part is finished ...

In this respect, «D» is simple:
- Arrows: movement (forward, backward, turn to the side) the choice of items in inventory;
- SPACE: Using this item on the screen or in the inventory. For example - to open anything.
- I - call inventory.
Early in the game you only have two things:
- Watch - using them, you will learn the current time games;
- Powder compact - it built a mirror, from which you can get some tips.

Home, really quite impressive - a successful doctor killed all their patients of the clinic. His daughter Laura arrives at the crime scene. Stepping through the numerous corpses, she encounters a strange shimmering object, which carries it to the old mansion. In two hours, she must find her father, to learn the secret of a horrible crime and the mystery of his own birth, and then leave the other world - before the gates slam shut.

Once in the house, turn around - you will be quite shocking vision. Turn around and go back to the far left door.
Climb the stairs and enter the door in front of you (on the left would not be anything interesting, except a cutscene). Go to the bookcase and open the box I. Take out a sheet of paper. Then go to the fire and take the key.
Now go back to the first room, turn right, then - forward and left. Put paper in the bowl, placed on a table. Roman numerals appear IV and II. Return to the room with a shelf, open the box IV, then a box II - and get the tap on the barrel.
Go down the stairs and turn left into the room with a barrel. Turn to the right and try to take a step forward - so, just for adrenaline pumping. Fortunately, the spikes will not reach up to Laura, so turn around to the left and try to tap insert found in a barrel - the spikes will be removed. Now go ahead and go down the stairs - you hit a closed door with the numbers 78.
Go back to the first room, go ahead and unlock the door with the key found in the fireplace. Sign and turn left. Take two steps and replace the mechanism 78, to get the ring.
Go down the stairs (a rolling stone does not kill you). Enter the room and go to the portrait of a little girl. Inspect it to see the vision of the four animals, the closest of which - a deer. Go around the room and then strode to the table to the left of the locked door. Turn the device on a table, while in the foreground you see a deer. This will unlock the door, go into it.
Then - to the next door, the one in front of you, open it and walk inside. Go ahead and take the hand of a skeleton yellow key. Return to the room with a portrait of a girl, go to the desk and unlock the box with this key - you get the book. Leave this room to the library (the big hall with busts and a bookshelf). Go to the shelf and put the book on it - it will open a secret passage.
Climb the stairs and go to the circular room with a rather strange mechanism. Scroll wheel on the car ten times. Then turn around and go down the stairs to the room with the armor and the pit. Knight attack on you (or just empty armor?). By the way, at the bottom of the screen will be lighted arrows, suggesting that we should do. Quickly turn left (after the light) to the right, left again, and then SPACE. Knight fall into the pit, and you will become the proud owner (owner) of the sword. By the way, if you do fall through the hole, nothing bad will happen - just up the stairs and repeat the above manipulation.
Go back to the circular room and spin the wheel seven times. Turn around and go up the stairs, go ahead, then left. Force open the door with the sword. Climb the stairs and go to the telescope. Turn to the right and set the telescope on the symbol of Sagittarius (bows and arrows). Turning to the left, look through the telescope. Note the color of the stars (Sagittarius - green). Now adjust the telescope to the symbol of Aquarius (wavy lines), again look at the telescope: the color of Aquarius - light blue. Then go down and turn right to the statue of Sagittarius and press the green button. Then go to the statue of Aquarius, and then a light blue button - you will see the vision (trunk rising from the flooded pit with spikes).
Go back to the circular room. Turn the wheel ten times, turn around and go down the stairs. Turn left and open the chest grab his gun. Go back to the circular room and spin the wheel three times, then turn around and go back to the window. Shoot him - the glass smashed to pieces, and you will be shown how Laura climbs the tower and climbs out the window.
Turns and go forward. Then turn right and look at the wall - will open a secret passage. However, before doing this, you can walk to the end of the hallway to admire another vision.
After passing through the secret passage, you will find yourself in another strange device. Using the switches and buttons to move the red ball lying on the left wheel, in the right center of the wheel. Now rotate the right wheel to pick up the ball. Car drive off, revealing a ladder. Climb up on it ...
Here fell. From him you will hear sentimental story about their ancestry going back to the very much-pierced Vallahskomu Tieliu - Count Dracula (so that means that the mysterious name of the game!). Are you interested to learn that, it appears, in a deep childhood personally killed, dismembered and eaten real mother. Now the blood of Dracula spoke and your father. Along the way, Dad will be transformed into a monster with a clear intention to do the same to you, that you at one time with my mother ... Not hesitating for a second, to embed became deadly parent several bullets.
Actually, this is the end of the story. Finally, you will be offered re-watch "movie", made on the game, including some pieces that has been left unattended.
‹
›
Home
View web version