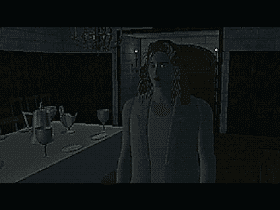 Before swap CD, save state to file, next CD, do not upload save state file, do not restart emulator, the game will continue automatically, save state to file again.
Genre: Adventure
Perspective: 1st-person
Gameplay: Puzzle-solving, Quick Time Events (QTEs)
Narrative: Horror
Published by: Acclaim Entertainment
Developed by: Warp Inc
Released: 1996
Platforms: SEGA Saturn, 3DO Interactive Multiplayer, DOS
This game is the first in the D series and one of the first, released by this company. It contains scenes of violence and cannibalism. The gameplay was implemented using CGI and FMV; the character is controlled from the first person. Also in D first appeared protagonist Laura, which is the main heroine of the games Enemy Zero and D2.

The game begins with the fact that a girl named Laura Harris receives a call from the Los Angeles police. She is informed that her father, Dr. Richter Harris, committed a massacre and barricaded himself in the hospital. Laura goes to the crime scene, hoping to find an explanation for such an act of a revered doctor. The police ask her to go inside and find out what's wrong. However, when Laura enters, she closes her eyes, and when she opens them, she discovers that the hospital has turned into an old mansion.
Laura examines the mansion; periodically she is visited by visions of how her mother is being killed with a knife. Laura's father (in the form of spirit) asks her to leave this place - to be in it too long means to stay in the mansion forever. He says that he will soon become a soulless monster who will try to kill her. However, Laura continues to search for her father, who is sealed in the uppermost room. As a result, the father discovers to her the secret: their family was founded by Dracula, and in every descendant lies the thirst for human flesh. Laura killed and ate her mother many years ago, but this incident was erased from her memory by her father. As Dr. Harris begins to turn into a vampire, Laura must make a choice: kill or be killed. There are four possible endings, depending on the player's actions:
‹
›
Home
View web version