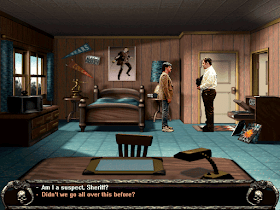 Genre: Adventure
Perspective: Side view
Narrative: Detective / Mystery, Horror
Published by: Cyberdreams
Developed by: Cyberdreams, Destiny Software Productions
Released: 1995
Platforms: Windows 3.1, PlayStation (PSX, PS1)
A direct descendant of the remarkable and in many ways innovative games.
Dark seed, implanted in the brain - how can such has no effect on human health, to say nothing of his mind? Disastrous experiment of alien humanity Ancients, almost became the first step in capturing them the normal world, of course, did not pass unnoticed for Mike Dawson. Preventing the coming nightmare turned out for his nervous breakdown and mental illness, to experience the consequences of a failed writer who went to the hometown.
There would be a happy End, but no. It took about a year, all the headaches were not appeased, and at the wrong time on the head of the unfortunate Mike fell another problem. His former school love, Rita, is found murdered on the morning after the reunion. Of course, Mike does not remember anything about last night, and someone says that Rita is seen in his company. To be the prime suspect in the murder at all unpleasant, but when it turns out that in engaging all the same ancient, so do not want to simply abandon their plans, events take a very unexpected turn.
Strange, but at 75 and 40 pre-rendered locations digitized from real people the characters (dialogues which occupy a larger share of playing time), the game seemed shorter than the first part. However, it is not important - it is more important that it became at times easier and more linear. For some this is a plus - because now there is no oppressive on the psyche of nerves and tearing to shreds the three-day period, after which character will die. Now it is extremely difficult to lose because of the missed events or not marked attention to detail. And anyway, does not reach the "happy" endings became problematic. However, this does not mean that the game has become more stupid - on the background of the competition puzzles whose solution is required to advance the plot, are quite interesting. In addition, corporate style of play based on the works of the famous Giger, is still here - backgrounds of many screens, in fact, are exact replicas of his works. In addition, the game got rid of the main weaknesses of its predecessor - the terrible gas pollution, who was second after the inexorable passage of time the problem players.
Moving from one world to Mike in the end, under your strict guidance, put an end to this nightmare. I would like to warn that the upbeat and cheerful end of the game, like all the events that occur as you move it, call does not work. Dark story with a bad end. This game breaks down the stereotype of the finals, good for all - someone always remain a loser, so why would this "someone" not to be the main character. This is definitely something to eat? ... perhaps because of this unusual atmosphere dark Seed II addictive and often does not let go of his dark embrace to the very end, without giving respite - try, maybe this artfully crafted world of darkness and doom for some time and will absorb you.