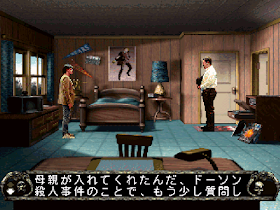 Genre: Adventure
Perspective: Side view
Narrative: Detective / Mystery, Horror
Published by: B-Factory
Developed by: Cyberdreams, Destiny Software Productions
Released: 1997
Platforms: PlayStation (PSX, PS1), Windows 3.1
The main character - Mike Dawson, after the events of the first part received a strong psychological trauma. Mike has severe headaches and memory lapses. He returns to his hometown to his mother.
A year later, Mike learns about the death of his school friend. Almost the entire city, starting with Sheriff Voulard Butler, suspects him of murder. Only one of his acquaintances is convinced that the ancients were involved in this. According to him, the ancients returned again and are trying to take over the world. Mike again has to get into parallel worlds and deal with the ancients.
In a local park, he comes to the attraction of crooked mirrors, from where he enters a mysterious maze. Wandering through the maze, he finds a portal leading to the dark world. Mike's adventures continue in a parallel world, where he reveals many secrets. The situation becomes more dangerous when Mike learns about a creature called Behemoth, which should destroy the whole world. Mike's main task is to prevent Behemoth from entering the human world.
‹
›
Home
View web version