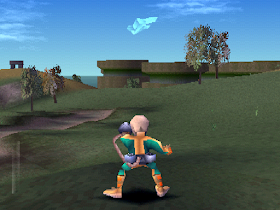 Genre: Action
Perspective: Behind view
Setting: Post-apocalyptic, Sci-fi / futuristic
Published by: Sony Computer Entertainment Europe Ltd.
Developed by: PictureHouse Software Ltd.
Released: 2000
Platform: PlayStation (PSX, PS1)
Greys' belong to a civilization older than our own and are similar in appearance to those little guys we see in alien documentaries. But they found themselves in a very unpleasant situation. The huge robot they built to replace the atmosphere on uninhabited planets and solve the problem of overpopulation turned against them. It should now be stopped. As soon as the robot that they created, the so-called Terracon, began to realize itself, it improved and became like a god. And then he destroyed the Greys' home planet. Now this machine travels across the Galaxy, blowing up all the planets in a row on its way.
You play on behalf of Seda (Sida), the only Gray who managed to escape destruction. You have taken on the immense task of activating the defenses of each of the planets and preventing Terracon's actions. It's kind of like the Last Gray Standoff, but you get some help with it. In addition to a variety of turbine-powered firearms, there is also the computer-generated spirit of Doc, the patriarchal know-it-all. You travel across planets collecting Genes and Cartridges, destroying bad guys and saving Worlds. At its core, it is a platform game. There are separate puzzles and action elements.
The game developer PictureHouse has come up with some ingenious ideas on how to enhance the experience, namely with the help of Genes. It is a certain form of energy that radiates in amazing tones. It can be used to create any useful objects (such as platforms and bridges) or to destroy enemies and destroy buildings. The intriguing genes of the various puzzle pieces are supported by other details, such as the recurrent power increase of weapons that swirl around your body to double your firepower or increase your rate of fire.
The 3D Mission Screen Selection Level looks just great, and the developer has managed to achieve simply great results, making us believe in something that really isn't. Forget about poking from one menu to another; you will be presented with a thematic presentation of what you can find in the game, which adds an additional atmosphere to the game. Even during the game, the time it takes to load the level map is explained as the time spent "Finding the basic information needed for the ship to function," making you constantly feel like you're staying in action.
‹
›
Home
View web version