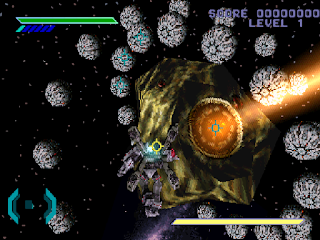 Genre: Action
Perspective: Behind view
Gameplay: Shooter
Vehicular: Mecha / giant robot
Setting: Sci-fi / futuristic
Published by: Sony Computer Entertainment America Inc.
Developed by: Polyphony Digital Inc.
Released: 1999
Platform: PlayStation (PSX, PS1)
Omega Boost is a development of the well-known genre of transformers, where all sorts of robots shoot at everything without a break and are quite gracefully transformed along the way. The game is detailed to the point of impossibility, and also has a huge number of locations. Dynamic lighting works differently in each area. Progress has already reached the point that each weapon is illuminated in its own way. Each robot has at least three types of weapons, two standard and one special (homing missiles, volcanic cannon and special attack), so all robots feel very confident in battle. Each robot can aim its missiles at the enemy in much the same way as it was done in the Panzer Dragoon series. But now you get the accelerated targeting capability that gave the game its name. Omega Boost has several other useful innovations. So, if you lose sight of the enemy, then your systems will automatically scan the surroundings in search of the enemy. There is also a homing laser, which acts automatically and can be aimed at several targets at the same time, and in addition, the Baru Cannon, which does not have much power, but shoots very quickly, and the projectiles are automatically aimed at the target. The device, mysteriously named Viper's Acceleration, is not really anything special. If there is no chance of finishing off the enemy with the help of standard weapons, then you can use this Haste to crash directly into the enemy, like a ram. Thus, you kill two birds with one stone - deal with the enemy and get rid of your dilapidated robot without the cost of disposal.
‹
›
Home
View web version