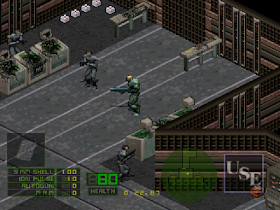 Genre: Action
Visual: Isometric
Gameplay: Puzzle elements, Shooter
Setting: Cyberpunk / dark sci-fi, Sci-fi / futuristic
Published by: Konami of America
Developed by: Konami of America
Released: 1996
Platform: PlayStation (PSX, PS1)
Seeking to surpass the famous Loaded game, the developers of this game start Project Overkill with a real carnage. And in the future, chilling military battles await you. Playing the role of one of four mercenaries, you will have to complete over 50 tasks, using seven types of weapons and getting involved in brutal combat. Judging by the nightmarish appearance of your enemies, there will be plenty of gore. A bird's-eye view of battles (isometric projection) is one of the features of the graphics performed in a 3D environment. Synthesized orchestral musical accompaniment will add sensation. And don't forget about the secret levels of the game! Actually, Konami originally wanted to create a 32-bit version of Contra. And the result was a completely independent game (they also made Contra, even two episodes) - a bloody, nerve-racking drama Project Overkill.
Maybe in a few centuries it is true that people will walk on some tentacles, as now on tiptoe? Maybe some planet Visser - 5 will go to war with us? At the very least, the developers suspect that the Earthlings will fight these invaders for dominance on the galactic level. Victory requires cold strategic calculation. Four characters come into play. Their mission is to clear the accessible part of the Universe from aliens.
For ultimate success, you need to go through the whole game with these characters in one go. The game includes 51 tasks over three worlds. Each time you choose your warrior and rush into battle, you can either win or lose. If you win, you will receive a valuable prize in the form of enhancing your arsenal of weapons. If you lose, your team will lose a valuable fighter. After all, different heroes are better suited for different tasks, so you should not lose any of them.
Project Overkill tickles your nerves with brutal scenes, colorfully rendered with modern graphics. Blood flows like a river. Even when you run out of ammunition, your hero can break the opponent's ridge with the butt of a gun; sneak up from behind and stab him in the back; bang him on the head several times and open his skull (some kind of nightmare - why am I writing this), etc. Here is such a "life-affirming" game! It looks most effective in closed rooms, where all walls are filled with red.
And in terms of the use of various types of weapons, Project Overkill stands out among all similar games. Each type of weapon adapts to a particular hero. A very unusual type of bomb weapon is a spider; it can be started and launched towards the nearest enemy, after which the moment of the explosion can be adjusted. She, by the way, can turn a corner! And the damned Visserians will have absolutely nowhere to go when you use the most powerful weapon - guided missiles.

Specialty - Blaster. Playing in the image of this woman, one must be careful: she is physically rather weak. But he has excellent explosive projectiles. Possesses the ability to transform. Three of her four weapons are flamethrowers. This means that it is capable of producing large-scale destruction of the territory around it, causing significant damage to many enemies. True, only a few of them die in this case, so that after Altea's work, additional cleaning is needed.

Specialty - Fighter. Apparently, this is the most level-headed character in the game. Possesses the most powerful weapon. Lanslow, an earthling by birth, a professional paratrooper. To raise morale, he uses special stimulants. Great specialist in the use of a wide variety of weapons. In particular, he has the most powerful weapon in the game at his disposal - the Auto Turret; something like that you could see in the movie "Aliens".

Specialty - Infantryman. This bruiser is slow, but weaker enemies will never defeat him - he is extremely powerful. This is a real fighter - a heavyweight with a terrifying appearance of a lizardman. If he runs out of ammo, then he is able to open the enemy's skull with his light machine gun. If in the course of the action it is necessary to crush a specific enemy, then this mercenary has no equal.

Specialty - Assassin. He starts the game armed with a knife, which is very convenient for ripping open the stomachs of Visserians. Gendrik is a cunning assassin who acts quickly and stealthily. In the game, these qualities are no less important than physical power, especially when you need to eliminate a specific opponent with precisely calibrated actions. But Gendrik's weapons are also capable of wreaking havoc in the opponent's camp.

The codes below should be entered during the game (but not in pause mode):

All weapons and ammunition