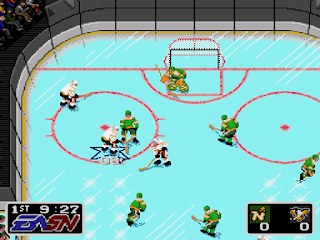 Genre: Sports
Perspective: Top-down
Visual: 2D scrolling
Interface: Direct control
Sport: Hockey
Published by: Electronic Arts
Developed by: Park Place Productions
Released: 1991
Platform: SEGA Genesis / Mega Drive
NHL Hockey is the first part of the NHL sports simulator series. The game had a revolutionary graphics for that time. The game was released in two versions, in the first there were only national teams (it entered the Sega Genesis platform), in the second there were only NHL clubs. There was music in the game that could only be played during breaks in the main menu. There were a lot of statistics per match. This game from EA Sports became the best-selling ice hockey game of its time.

Mega Magazine ranked the game as the second best Megadrive game published in October 1992. According to a columnist for Maximum magazine, the game "became a classic" thanks to the reputation of John Madden Football and excellent reviews in Mean Machines magazine. Julian Rignall of Mean Machines called the game "classic" and noted that it provides a "unique" multiplayer gaming experience but remains "addictive" when played against the computer.
‹
›
Home
View web version