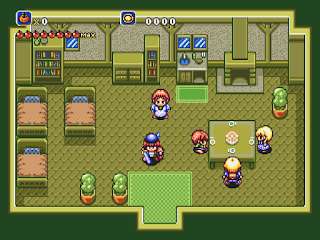 Genre: Action
Perspective: Top-down
Setting: Fantasy
Published by: Atlus Software Inc.
Developed by: NexTech Corporation
Released: 1994
Platform: SEGA Genesis / Mega Drive
The story centers on Corona, a boy who has just turned 14 and must inherit his late father's sword to fight the monsters that threaten the existence of the human race. The gameplay takes an overview and focuses on exploring, fighting enemies with a sword and solving puzzles. As the story progresses, numerous animals join the hero and help him. They are used in gameplay as weapons or tools, which often grant passage to previously inaccessible areas.

In Soleil Town, a law requires that all 14-year-old boys go to train and prepare for battle. The game's hero, Corona, just turned fourteen at the start of the game. As such, Corona receives the sword and shield from his father, who died in battle and had a great reputation for his courage in defending the city.
The story is divided into two parts. Corona must first wait a while to discover his world and unlock the various levels that comprise it. He can then access them in his spare time. For even this half of the game, Corona will not be able to speak to humans, but only to animals and plants. Only after defeating the dragon beast, Merda (pronounced Mairdah), will the second half of the game begin: Corona regains the ability to speak to humans and travel through time to build a better world and understand why monsters are at war with the humanity. Are they really the monsters that are the barbarians of the world?

At the beginning of the game, Corona finds himself losing his ability to talk to other humans and, instead, being able to talk to animals. Some of them will join him, lending Corona his skills while they are "equipped". Each animal has its own special technique. The first animal the player receives is Corona's pet dog, Mac (US version), or Johnny (UK version). He can hold enemies for Corona to attack. Later, the player receives a penguin, called Chilly (US version), or Penguy (UK version), which will give Corona's sword an ice attack. A total of 16 animals can be obtained.
‹
›
Home
View web version