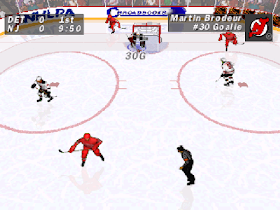 Genre: Sports
Perspective: Bird's-eye view
Interface: Direct control
Sport: Hockey
Published by: Sony Computer Entertainment of America
Developed by: Sony Interactive Studios America
Released: 1996
Platform: PlayStation (PSX, PS1)
What could be more interesting than sports? Perhaps this is a sport with elements of cruelty. And what could be more exciting than fierce battles? These are probably tough sports fights! This means that we have to say a big thank you to SONY (namely, its American subsidiary SCEA) for releasing a new game imitation of professional hockey. It can be said without exaggeration that for the PlayStation system the richest collection of sports video games has been collected: namely, football, tennis, golf, baseball. However, for some reason hockey has not yet been covered. And now the time has come to sharpen skates and polish helmets: your attention is invited to the game NHL FaceOff. This is an exciting entertainment and a vivid show, where ice fields shine with splendor, the stands roar, and in the pauses, the sounds of an electric organ warm up the blood.
Each match begins with the first throw-in by the referee. The forwards who stand face to face begin to fight for the puck, while trying to beat off the opponent's legs as much as possible. But now the Detroit team scores the first goal! Sergey Fedorov throws the puck with a powerful throw after Sheppard and Coffey's passes. In the beginning, it is much easier to shoot the pucks after a series of passes, rather than as a result of individual passes. In a team, you need to forget about your “I”. And suddenly things turn out to be a completely different side. Fedorov was just a hero, and now he is sent off the field for attacking the rival goalkeeper. Although, on the other hand, you can always disable the uninstall system.
At first, you might think that NHL FaceOff is a fairly ordinary, not too complicated imitation of hockey. But after playing a little, you begin to understand that this is a very subtle game that opens up more and more new possibilities. And it's not about some unusual details of the life and customs of the NHL, but simply the high quality of the game action and ease of control. The dynamics of the hockey game and all the physics of what is happening on the screen leave a feeling of absolute naturalness. All this feeling is reinforced by everything that happens around the ice arena. Keep in mind that not only the action itself can captivate. You can compare teams by player class, check team schedules, enter player databases and even create new hockey players for yourself! In a word, perform all (or almost all) managerial functions. This gives the game an economic aspect. The presence of a detailed database of hockey players and teams allows us to satisfy the tastes of both hockey connoisseurs and those who are first interested in this popular sport.
In short, find yourself a buddy - a partner, have some patience to get involved in the game - and great fun awaits you! Even if you do not have any special feelings for hockey, then use the arcade game mode and have fun!

As with all modern sports imitations, there are several options for observing the game for your taste. Let's consider some of them:

When creating a new character, hold down the L1 + L2 + R1 + R2 buttons and set all attributes to 40. If you did everything correctly, you will hear a call. Now you can tweak each attribute to its maximum.

Another kind of command

When "Just a Minute" is lit, press and hold the X + Circle + L2 buttons until you hear a characteristic sound.
‹
›
Home
View web version