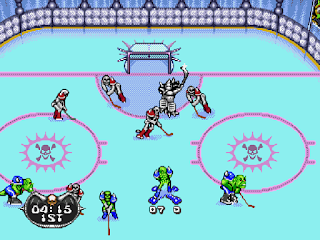 Genre: Action, Sports
Perspective: Bird's-eye view
Visual: 2D scrolling
Gameplay: Fighting
Sport: Hockey
Setting: Sci-fi / futuristic
Published by: Electronic Arts
Developed by: Abalone, Mutant Productions, New Wave Graphics
Released: 1994
Platform: SEGA Genesis / Mega Drive
In the distant, as always terrible future, our mutants were completely stunned ... They say we want to play hockey ... They gave us clubs and other equipment ... So what next? And then the fact that all of this turned out to be a hellish mixture of scuffle and hockey with great humor, even if black! There are two ways to victory: either kill everyone, or score a bunch of goals in a "fair" game. The first way will be more fun! :) I wanted to pour out all the hatred on some troll who scored a goal for you ?! Please, all is fair here. Fortunately, all these funds are ours, heated up by the match, the audience will gladly provide them by throwing chainsaws, clubs, Molotov cocktails and so on at the rink. You can slap the judge as it should ... The skating rink is also extraordinary: now there are some holes, getting into which no one else comes back, then there are thorns along the edges of the curb. Yeah! .. The game is overwhelming! And even if you didn’t like hockey before, this game will probably force you to change your views.

To play as Darkstar Dragons in playoffs, use these passwords:
To play as the Lizard Kings against the Mutant Monsters in the Monster Cup championship, enter "3BFL2XLBKRRSL".
‹
›
Home
View web version