Kings of the Beach (NES) 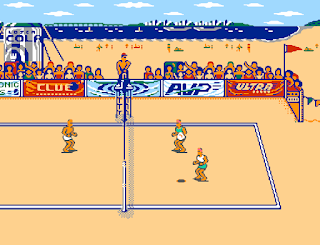 Genre: Action, Sports
Perspective: Bird's-eye view
Visual: 2D scrolling
Sport: Volleyball
Setting: North America, Oceania, South America
Published by: Ultra Games
Developed by: Electronic Arts
Released: 1989
Platform: Nintendo (NES)
The player can play as Sinjin Smith or Randy Stoklos, two real-life US champions. In single player the teammate is controlled by the computer, while in multiplayer two players can pair up on the same team or play in competition, with one computerized partner for each.
The game features three modes: practice (dunk practice, dribble or reception), match play (single match) and tournament (tournament). In the latter you proceed to five beaches (San Diego, Chicago, Waikiki, Rio de Janeiro and Sydney) playing three games in each, against increasingly stronger opponents. When you pass a level, you are given a password that allows you to resume the game from that city. Other real players featured in the game are Ron Von Hagen, Tim Hovland and Mike Dodd, but EA has also included characters from other of its games, such as Hard Hat Mack (star of the game of the same name) and Lester from Skate or Die! and Ski or Die.
The field is shown with a 2.5D perspective view from the longest side and the players can move in all directions and perform various actions: standing or jumping serve, bagher, dribble, dunk, block. In the PC version, playing with the keyboard, you have three specific keys for bagher, dribble and dunk / wall, while in the console version the action buttons are reduced to two and on Commodore to only one. The dives to catch a long ball are automatic. The only "advanced" moves are the ability to fake a dribble and then throw the ball to the other side, or to make a one-handed block ("Kong" block, Stoklos specialty).
You can also protest against the referee, who may occasionally return the point to the player; However, if the referee rejects the protest, you receive a yellow card and the second time a red card with loss of one point.
‹
›
Home
View web version