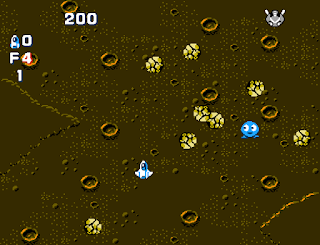 Genre: Action
Perspective: Top-down
Gameplay: Arcade, Shooter
Setting: Sci-fi / futuristic
Published by: NEXOFT Corporation
Developed by: Compile
Released: 1991
Platform: Nintendo (NES)
The game takes place in the distant future in connection with the invasion of civilization by aliens. The player controls a spaceship, which has 5 types of main weapons and 4 types of additional weapons, which can be improved by taking this weapon again. When an enemy weapon hits the player's spaceship, the latter loses its life. However, there is an additional shield that can withstand one hit, but after that the shield disappears. Also, the shield allows you to increase the power level of the weapon. There is a game store in the game, to which the player goes after each completed level. In the store you can buy weapons, a shield, in addition, you can buy additional weapons, which the player will receive to a certain level, which he chooses himself. There are a total of 8 levels in the game, each of which has a boss at the end, and a mini-boss in the middle (except for level 7, in which there is only one boss at the end and level 8, in which there are 3 mini-bosses and 2 bosses at the end) ... There is also a secret in the game: if you put on the fifth musical theme in the game options in the "sound test" section, the list of levels will open, even if the game has not been completed. Moreover, along with the 8 levels present in the game, a secret, zero level will also be available, in which a mini-boss of the sixth level acts as a boss.
‹
›
Home
View web version