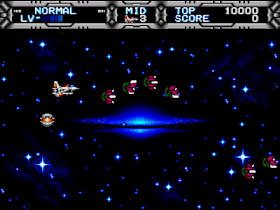 Genre: Action
Perspective: Side view
Visual: 2D scrolling
Gameplay: Shooter
Vehicular: Space flight
Setting: Sci-fi / futuristic
Published by: Renovation Products
Developed by: Renovation Game
Released: 1990
Platform: SEGA Genesis / Mega Drive
Most horizontal shooters require the player's ship to contact a capsule to gain weapons. Gaiares' design was different, and features one of the most original and unique weapon power-up systems in the shooters genre to date. The TOZ System device can be fired as the R-Type Force, except that each time it comes into contact with an enemy, it will inherit and learn its weapon; the player can steal the same enemy repeatedly until the weapon's strength is at maximum. There are 18 weapons in total to be captured, and the appearance of each weapon varies depending on the strength meter.
Many of the phase designs were heavily influenced by Macross, Gradius and Valis, although some deviations are apparent in bosses like Death Ghetto and Mermaid. Gaiares makes extensive use of parallax scroll, wave and warp effects in all eight phases, and the bosses are mostly screen size, making it one of the debut shooters on the 16-bit platform. The game is notorious for its high level of difficulty.

In the year 3000, the Earth became a toxic deposit devastated by careless human beings, leaving a polluted and uninhabitable wasteland. The Gulfer space pirates, led by the evil Queen ZZ Badnusty, plan to collect the pollution to create weapons of mass destruction. Leezaluth's United Star Cluster sent a warning to Earth about their plans, stating that if they couldn't stop them, they would be forced to make Earth's sun supernova to do it themselves; but if they succeeded, Leezaluth would use his technology to restore the Earth to its former beauty.
Dan Dare (Diaz in the original Japanese), a young pilot from Earth was chosen to be the pilot of a new combat ship to fight the Gulfer. The ship is armed with a powerful experimental weapon from Leezaluth, called TOZ System, which would be operated by Alexis, an emissary from Leezaluth.
‹
›
Home
View web version