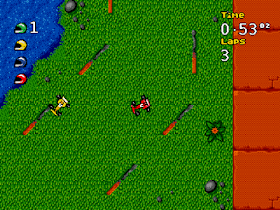 Genre: Action, Racing / driving
Perspective: Top-down
Published by: Codemasters
Developed by: Supersonic Software Ltd.
Released: 1995
Platform: SEGA Genesis / Mega Drive
The gameplay is identical to the previous game. The races are seen from a top-down perspective and players compete in environments such as bathrooms and pool tables in vehicles such as motorboats and helicopters. The game adds sixteen different vehicles. Several courses contain obstacles in the form of common household items.
Just like in the original game, there are the challenge modes, "Challenge" and player-to-player, "Head-to-head". In the challenge mode, the player participates in a series of races against three opponents and must finish first or second to advance to the next race. If a good enough lap time is completed on the early tracks, the player automatically wins the race. If the player first places himself three times in a row, he gets the opportunity to win an extra life by playing a special round and collecting vehicles within a certain time limit. Player-to-player is a mode that involves getting your opponents far enough behind you and becoming the only driver left on the screen. This gives the driver a point that is indicated on the screen in the form of colored lights. The light that comes on corresponds to the color of the player. If all eight lights go in one suit, the player wins with that suit. If the lights are different after three races, the player with the most lights wins. The player-controlled driver has three lives in both game modes. Players choose a character, whose characteristics only affect computer-controlled players, to play as before competition. Micro Machines 2: Turbo Tournament also includes new game modes, "Leagues", "Time Trials", "Single Race" and "Tournaments". In the "League", players compete for points in leagues. Each season consists of four races. Players with the most points at the end of the season advance to the next division and players with the least number of points are eliminated. "Time Trial" is the mode where players drive for themselves (with the exception of certain lanes where a shadow driver represents the best time) towards the best lap time or to train. In "Single Race", players compete in a series of races where the vehicles start in the middle of the screen and then move further apart as the race progresses. If a vehicle ends up outside the screen, it is knocked out, as long as the vehicle has not come farthest. The game ends when only one driver remains. "Tournaments" are organized series of races that are played in a similar way to "Single Races". The winner is the first player to win a certain number of times.
There are also two game modes for "Knockout" and "Share Games" only. "Knockout" contains a series of races similar to those in "Tournaments", where the winners continue to the next round while the losers are eliminated. "Share Games" is similar to "Single Race" but the vehicles have different team colors and each team's final position is determined by which member performs best.
‹
›
Home
View web version