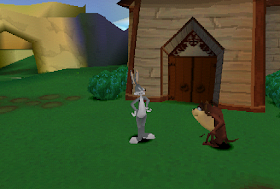 Genre: Action
Perspective: Behind view
Interface: Direct control
Setting: Fantasy
Published by: Infogrames
Developed by: Artificial Mind & Movement
Released: 2000
Platform: PlayStation (PSX, PS1)
Another platformer based on the Looney Tunes cartoons.
In my opinion, this is a very strange gaming series - unlike the vast majority of others, it has not degraded over the years, but only progressed, and literally in all directions.
The Time Machine (which Bugs Bunny dealt with in the game Lost in Time) is broken again (this time Daffy Duck is to blame: after chasing a rat, he got into Granny's attic where this car was parked, and crashed into it together with its main element - the Stone Age - disappeared in the darkness of centuries), and the brave rabbit will again have to travel back in time (to different eras and countries - the Aztecs, Vikings, Arabs and Transylvania of the time of Dracula) to collect its parts. Remake? In some ways - maybe, if not for one very weighty "but": this time the great and terrible Taz in person is going with him !!!
Although we are in control of Bugs for most of the game, control can be switched to Taz. We will need both of them - if Bugs, for example, jumps high, then Taz, with his trademark "whirlwind", will pave the way for us where he just wasn't.
It's not worth describing the gameplay in detail - if you've ever played a three-dimensional platformer, it won't be difficult to get used to it, at least at first. Because then jumping, collecting objects and arcade bloodless battles will be supplemented with "riddles" (though not particularly difficult).
The main advantage of this game, in my opinion, is the presence of Taz in it. Not because I love him very much (although I love him very much), but because he objectively brings variety to the, alas, rather dull gameplay. Unfortunately, the game has all the shortcomings of the previous parts of the series: not very convenient control, terrible camera, somewhat weird graphics - it seems that the cartoon was spoiled, "diluting" it with not the most beautiful three-dimensional models ...
In short, the game is at least not bad, but first of all, either for fans of platformers, or for fans of the series. If you just want to familiarize yourself with it (the series), I advise you to look at the newer Sheep, Dog 'n' Wolf and Taz: Wanted - they are objectively better in all respects.
‹
›
Home
View web version