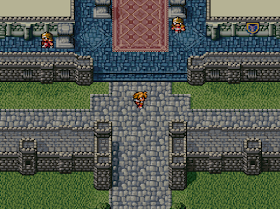 Genre: Role-Playing (RPG), Compilation
Perspective: 3rd-person, Top-down
Pacing: Turn-based
Gameplay: Japanese-style RPG (JRPG)
Setting: Fantasy
Published by: Square Enix U.S.A.
Developed by: Square Co.
Released: 2003
Platform: PlayStation (PSX, PS1)
A PlayStation remake of Final Fantasy was released along with its sequel, Final Fantasy II, in the Final Fantasy I + II Premium Collection. Both of these games were based on remakes for the WonderSwan console (WSC), and most of the changes came from the WSC version, although there were some other variations. In Japan, Final Fantasy I + II Premium Collection was released on October 31, 2002.