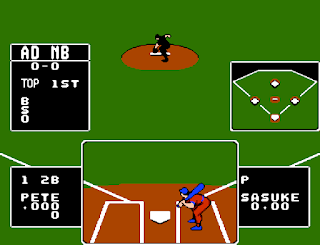 Genre: Sports
Perspective: Bird's-eye view
Gameplay: Arcade
Sport: Baseball
Published by: Nintendo of America Inc.
Developed by: SNK Corporation
Released: 1989
Platform: Nintendo (NES)
Baseball Stars was the first baseball game to have battery backup on any console - and the first sports video game for the NES to have battery backup (overall). This allowed players to create a team, set up a baseball league and play seasons; in addition, the game's chip stores cumulative statistics.
Baseball Stars is also the first sports game for the NES to create a multiplayer feature as it gave players the ability to name their teams and recruit their members. The game introduced an RPG element, since, for each match played, the winning team earns money and the amount won is directly related to the sum of the prestige of the players of both teams - as prestige determines how many fans payers participate in the game. The money can be used to purchase upgrades to the various skills of players currently on the roster, or used to purchase system-controlled players (available in the categories: "Rookie", "Veteran" and "All-Star").
Additionally, a hidden feature allows players to take on female characters.

To beat, the player-controlled character swings on a level plane, so it's a matter of timing. The field at the time was a revolution in arcade baseball games as it reached a level of realism never seen before its release.
There are several details that characterize the game, such as the commanded characters that automatically move towards the balls, which automatically capture them if they are near them; the ability to jump and jump without further player interaction, receivers moving to avoid further base hits down the line when other player characters are on base etc.

Baseball Stars includes a simple "versus" mode - one-off - but offers the ability to create a mini-league of up to six teams, with each team playing up to 25 games against every other team. This means that you can create a season with up to 125 game schedules. When creating a season, you choose how many matches and how many and which teams are controlled by the AI and which are controlled by the players.
In the "VS" mode, no stats (wins, losses, shots or home shots) are maintained, but money can be won when a player controlled team plays against an AI controlled team.
When playing in this mode, the player does not earn any money.

There can be a total of 14 teams - of which 8 are generated automatically (by the game) and cannot be modified; while the rest can be created manually (by the player).
Although the game doesn't use real Major League Baseball teams, one of the default teams: American Dreams included players with names based on real (former) baseball players - like "Pete" (Pete Rose), "Hank" (Hank Aaron) , "Babe" (Babe Ruth), "Sandie" (Sandy Koufax), "Cy" (Cy Young), "Denny" (Denny McLain) and "Willie" (Willie Mays). Additionally, the Japan Robins included a player named: "Oh" (presumably, after Sadaharu Oh - of Japan's Nippon Professional Baseball).
When creating a new team, you are given the option to choose its main force (defense, running, batting, balance ...) - although this does not mean that a chosen force will remain permanently in the team; rather, the option favors the chosen attribute when the computer randomly generates players.
Each new team receives around $ 30,000 and 18 players to start. From there, matches are played and those won earn money for the team. The appearance of the players of the created teams can be changed - the players themselves can be swapped between the various teams - and their performance can be improved. There is also a free agent marketplace where players can be purchased for a price ranging from $ 5,000 to $ 2,980,000. Since there is a limit of 18 players per team, before a free agent can be purchased, one player must be fired; if a player is mistaken for a player with higher attributes, the attributes of the better player decrease; each player has a maximum number of attribute points possible (out of 90), with some players having a higher potential than others.
‹
›
Home
View web version