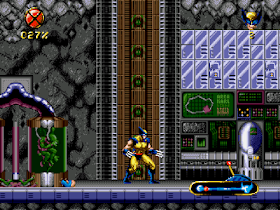 Genre: Action
Perspective: Side view
Visual: 2D scrolling
Gameplay: Platform
Setting: Sci-fi / futuristic
Published by: Acclaim Entertainment
Developed by: Teeny Weeny Games
Released: 1994
Platforms: SEGA Genesis / Mega Drive, Super Nintendo (SNES)
Wolverine is without a doubt the most popular super hero of the X-Men. In this arcade game you have to visit his shoes, learn all his advantages and problems arising from his super abilities.
This is one of the best platformers, based on Marvel comics, released for Sega. Only X-Men 2 - Clone Wars was made with the same quality.
‹
›
Home
View web version