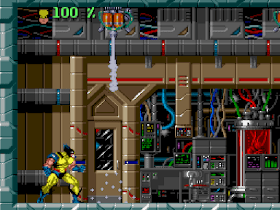 Genre: Action
Perspective: Side view
Gameplay: Beat 'em up / brawler, Platform
Setting: Sci-fi / futuristic
Published by: LJN
Developed by: Bits Corporation
Released: 1994
Platforms: Super Nintendo (SNES), SEGA Genesis / Mega Drive
Another action game with a superhero on the Super Nintendo. This time we have one of the members of the X-Men team, known by the code name Wolverine. This is the fourth game with this character on this console, who has already appeared in such excellent implementations as X-Men - Mutant Apocalypse, Marvel Super Heroes and the completely incoherent Spider-Man and the X-Men in Arcade's Revenge. In this game, as well as the version for SEGA Genesis, you will again have to go into the shoes of this hero, to know all his virtues and problems that arose from his superpowers and past life. There are many combinations here, so you can get confused when you first get acquainted with this product. Climbing, jumping, kicking, punching, clawing and animal dexterity are all present in the skills of our hero. Suitable for all fans of X-Men, Logan and games based on comics from Marvel.
‹
›
Home
View web version