The Misadventures of Tron Bonne (PS1) 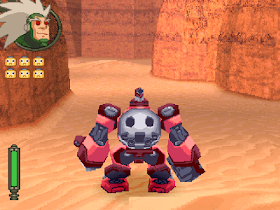 Genre: Action
Perspective: 1st-person, Behind view
Art: Anime / manga
Gameplay: Puzzle elements, Shooter
Setting: Post-apocalyptic
Vehicular: Mecha / giant robot
Published by: Capcom Entertainment
Developed by: Capcom Co.
Released: 2000
Platform: PlayStation (PSX, PS1)
This is not to say that the Bonne family consisted of decent people. They were all pretty bad guys, of course, but compared to the nightmarish Ross, the greedy shark who lends money from time to time, they were just real angels. So it's pretty stupid, knowing who Ross is, to borrow money from him. It was clear that things would end badly. And when Ross's bouncer, a huge guy like a bull, came for the next payment, and there was no money, he simply captured Tiasel and Bomb, leaving their poor sister on an airship called Gezelschaft. Thank God, at least not one, her loyal Servebots remained with her. However, Tron is not such a helpless girl despite being 14 years old. She saw something, and she cannot leave such an outrage without consequences. Our heroine is determined to kick the ass of all this bastard camarilla, of course, not without the help of her Servebots. This is how this fantastic adventure begins.
‹
›
Home
View web version