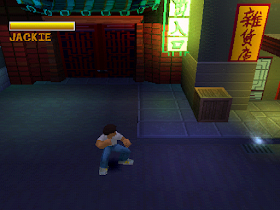 Genre: Action
Perspective: Bird's-eye view
Narrative: Martial arts
Published by: Midway Home Entertainment
Developed by: Radical Entertainment Inc.
Released: 2000
Platform: PlayStation (PSX, PS1)
Known for his stellar roles in films such as Mr. Nice Guy, Rumble In The Bronx and Drunken Master II, Jackie Chan, in collaboration with Midway, created a project for himself, his beloved. In the game, you fight a lot, jump off chairs, rush along stairs, etc. The game begins in any place of one of the above Jackie Chan films. Your task is to take on the role of Jackie Chan and find out how your movie really goes on. Actions in Jackie Chan: Stuntmaster take place in more than twelve unusual situations, saturated with tricks of all kinds and interactive scenes in which you can throw various utensils at your opponent, whether chairs, stairs, cans, bottles, even benches - all this goes into business and makes the game attractive. And in one part of the video game, you should boldly jump from the top of one roof to another using a sleeping mattress. Among other things, Jackie’s classic dodges and punches are not forgotten, however, there aren’t so many of them and if it weren’t for the opportunity to throw everything at hand, it would be completely boring. Nevertheless, the game suffers from the monotony of the process, which is generally characteristic of the genre. The levels in most cases are filled only with enemies and after you deal with them, a situation may arise that you run through the stage, the enemies seem to be already “buried”, and the further goal is not always clear. Whatever it was - playing with Jackie is already fun by definition and having it in the collection of games will not be amiss.