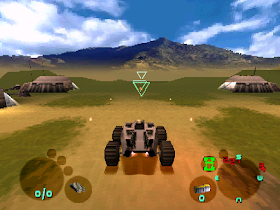 Genre: Action, Racing / driving
Perspective: 3rd-person
Pacing: Real-time
Gameplay: Arcade
Vehicular: Mecha / giant robot
Setting: Sci-fi / futuristic
Published by: Ubi Soft Entertainment Software
Developed by: Frontier Developments Ltd.
Released: 2000
Platform: PlayStation (PSX, PS1)
You are driving the most amazing cars and have to explore huge levels. In essence, you can control "mutating" machines for the first time. In each mission you have the opportunity to improve your car so much that it becomes simply unrecognizable, sometimes turning into an aircraft or Buggy Amphibious, capable of driving on water and even into a small fighter plane (five modes in total). But to do this, you must complete special tasks, for example, find some free scientist, and then collect special crystals that grow in various places of the landscape. When you do this, then go to the nearest factory, exchange these finds for various devices to modify this machine. In addition, you can enhance your weapons and get other interesting equipment.
The game consists of 22 very large levels located in 24 different landscapes. They represent giant expanding worlds where you can race in your car, fly, in general, do whatever you want. At the early levels, completing the mission objectives is quite easy, but at later levels, this task becomes more and more difficult. In addition, additional complexity is created by the numerous space "bugs" that continuously destroy human settlements on the planet. Missions change noticeably. In some you need to destroy special machines that continuously create numerous beetles, while in others you have to help your people defend bases that are attacked by more than 30 different types of foreign enemies. You will need at least 40 hours to successfully complete the game.
‹
›
Home
View web version