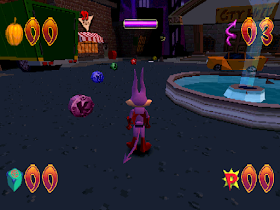 Genre: Action
Perspective: Behind view
Gameplay: Platform
Published by: Ocean Software Ltd.
Developed by: Behaviour Interactive
Released: 1997
Platform: PlayStation (PSX, PS1)
This very unusual game includes some elements of such super popular games as Crash Bandicoot and Mario 64. Such a cocktail, especially in a 3D cartoon world - what could be more unusual? It all starts with a cartoon, which reveals the plotline of the storyline. Mad scientist Dr. Knarf begins experimenting with mutations in the plant kingdom, dreaming of creating a reliable army of walking plants. One fine day, the main favorite of Dr. Dennis Pumpkinhead (or simply a pumpkin) came across a strange "baby". Little purple "kid" - well, just a cartoon devil - wonderful horns, wings and even a forked tail! Knarf immediately decided to cut it (inquisitive!), But did not find a scalpel at hand. When he went to town for his instruments, Jersey managed to slip out of the lab.
Many years later. Knarf's army began to terrorize the citizens of Jersey City, and now the grown-up Jersey Devil decided to ruin the devil's plans. Armed only with ingenuity, he has to make his way in 3D cartoon levels with jumps, turns, spins, smashing mutants and other "freaks", trying to achieve truth and justice.
For the first time on a PlayStation, a stunning 3D animation is created, bright, dynamic, with a brilliant collection of puzzles. You might be surprised - puzzles in a platform game? Yes, this game is truly a typical platformer. Each level has closed doors that can be opened if only you can collect the letters you need and conjure the name of your nemesis Knarf. But there are other kinds of problems. On one of the levels, Jersey will face a caveman standing at the top of a pyramid. Jersey can bring down the top of the pyramid (if it has time) and bury the Neanderthal under the rubble. And if he does not have time, then he himself will be locked up. And it's not easy to find a way out - the little window is too far away for the little devil. After unsuccessful attempts, it becomes clear that only by dragging the lifeless body of the Neanderthal and standing on his belly, you can get out. The belly will work like a throwing board, what is it! This game, in essence, is a fresh stream - a departure from the typical platformer uninteresting wanderings. Even Mario 64 doesn't have such puzzles!
Of course, there are also numerous enemies and bosses that are so hard to deal with! There are many secret areas and useful items hidden sometimes under the collapsed walls, and you can get them only by throwing a box or other large object (oh, how difficult it is for baby Jersey!). Our hero has only three attacks: spinning tail attack, flip attack and simple blow. But how can they destroy such huge obstacles? Jersey, however, has wings, but cannot fly. He only plans slowly from any height - it is very easy to control his flight. It helps when jumping off rooftops, trees and flagpoles. Jersey may be able to drive and ride some animals. And that is not all!
Mindful of the unprecedented success of Mario 64 (it is clear that this type of game will inevitably have a big impact on subsequent developments), the creators did not forget about the sad fate of Bubsy 3D. 3D graphics cannot by itself ensure success; an excellent script is also needed. And in this direction, the developers of Jersey Devil have worked wonderfully well.
‹
›
Home
View web version