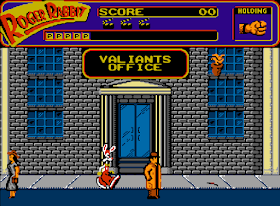 Genre: Adventure
Perspective: Side view, Top-down
Narrative: Detective / mystery
Published by: LJN Toys
Developed by: Rare Limited
Released: 1989
Platform: Nintendo (NES)
A game based on the famous movie "Who Framed Roger Rabbit?". The hero of the Hollywood animation is accused of killing one of the famous people in the city. And you, as the best detective, have to save the honest name of the eared.
Passing through Los Angeles through districts, parks, warehouses and even through an animation studio, you simply have to help Eddie prove that Roger is not guilty. As in any decent adventure or quest, there are enough items with which you can solve the murder. And at the end of the game, Doom Judge himself is waiting for you!
There is also a game with the same name on the PC and Game Boy, but the gameplay is different.
‹
›
Home
View web version