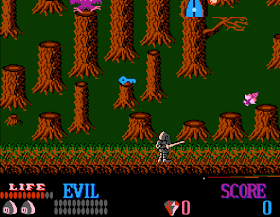 Genre: Action
Perspective: Side view
Visual: 2D scrolling
Gameplay: Platform
Setting: Fantasy
Published by: Acclaim Entertainment
Developed by: Rare Limited
Released: 1987
Platform: Nintendo (NES)
"Wizards & Warriors" is an interesting and unique game for its time.
We play as Knight Kurosh, the hero of the book Excalibur. Our journey begins in the depths of the Elrond forest, where even the wind obeys the supreme magician Malkil. He is so powerful that Merlin calls him a teacher. But now Malkil left the path of the righteous and stood on the dark side: he abducted the Princess and her six servants.
Having drunk potions, we will be able to soar above the earth, control time and possess other abilities and sorceries. However, all this is opposed by countless hordes of enemies, demons and other undead ... And only we with our sword of courage can fight back demons and sorcerers!
The game has several ways to attack enemies: just attack with a sword; hold the sword in your hand and wait for the opponents to stumble on it themselves (yes, the enemies will die, even if they touch the sword themselves); hit with boots; throw a dagger or ax at the enemy; and, finally, use items (and there are plenty of items in the game).
In general, Wizards & Warriors is a full-fledged beautiful platformer with very small RPG elements. The game is recommended for review.
‹
›
Home
View web version