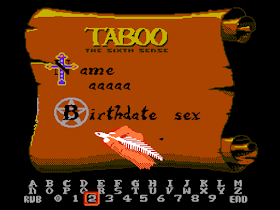 Genre: Simulation
Gameplay: Cards / tiles, Party game
Published by: Tradewest
Developed by: Rare Limited
Released: 1989
Platform: Nintendo (NES)
Turn the Nintendo Entertainment System into a tarot card deck with Taboo: The Sixth Sense. Write down a questions via the controller, and after a shuffling of cards, the game will attempt to predict your future. Some fortunes may be positive, offering wealth, fame and power. Other fortunes may warn the player to take care and use caution in future events. After the final card is revealed, the player has an option to choose their lucky numbers. Obviously, Taboo: The Sixth Sense is meant for entertainment purposes only, and should be taken as such.
‹
›
Home
View web version