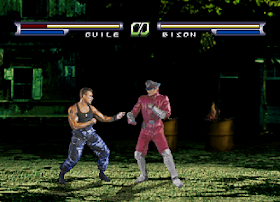 Genre: Action
Perspective: Side view
Visual: 2D scrolling
Gameplay: Arcade, Fighting
Published by: Acclaim Entertainment
Developed by: Capcom Co.
Released: 1995
Platform: PlayStation (PSX, PS1)
Street Fighter: The Movie is a 2D versus fighting game based on the movie of the same name, which in turn is based on the well known Capcom series, Street Fighter. Gameplay is similar to Street Fighter II and Super Street Fighter II Turbo. Select from a range of fighters (including Ryu, Ken, Guile, M. Bison and Chun Li) each with their own set of special moves, and defeat all of the opposition to become the King of street fighting. The game uses digitized animation based on the actors and the many locations featured in the film.
Also included is a story mode which follows the story of the movie and uses FMV in-between fights and a Trial Battle Mode, where the player takes on Guile in a range of different battle events to test their skills.
‹
›
Home
View web version