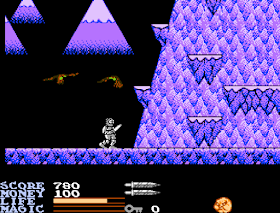 Genre: Action
Perspective: Side view
Gameplay: Platform
Setting: Fantasy
Published by: Acclaim Entertainment
Developed by: Zippo Games
Released: 1989
Platform: Nintendo (NES)
The mighty warrior Kuros has defeated the evil wizard Malkil in the previous game. However, Malkil did not perish, and has now taken the shape of the four elements: water, wind, air and fire. Kuros is summoned to the land of Sindarin to destroy Malkil again. In order to accomplish that, he will have to collect the shattered pieces of the legendary Ironsword with the help of the four animal kings, and defeat the elementals who protect Malkil's essence.
Like its predecessor, Ironsword: Wizards & Warriors II is a side-scrolling action game with platform elements. Kuros uses swords and spells to fight the enemies in his path. He can also jump and crouch, which is often necessary to move through a stage and avoid taking damage. The game world consists of four domains; in each of those, Kuros must find a golden artifact and bring it back to the animal king residing there. This opens the path to the elemental boss guarding the domain, which must be defeated with spells.
Magic spells can be bought in special locations or found during exploration. They have a variety of functions, e.g. turning enemies into money or food, slowing down enemies, granting Kuros temporary invincibility, or creating fountains that help him reach high areas. Some of these spells disappear after one use, while others consume magic points. Weapon and armor upgrades can also be bought in shops. Kuros can restore his health by eating; food is either scattered throughout the stages or offered at inns.
‹
›
Home
View web version