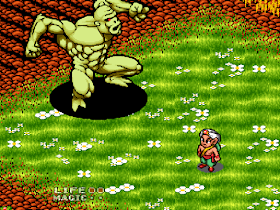 Genre: Action
Perspective: Bird's-eye view
Visual: Isometric
Gameplay: Platform, Puzzle elements
Setting: Fantasy
Published by: Sony Imagesoft
Developed by: Software Creations Ltd.
Released: 1994
Platform: Super Nintendo (SNES)
An excellent adventure game in which there are all kinds of puzzles and the ability to smack your brains. Combined with superior pseudo-3D graphics and an unobtrusive soundtrack, this game is simply hard not to recommend. The developers did not skimp on visual effects. There are all kinds of music tracks for each dungeon. Your hero begins his adventures with a global map, but as soon as he plunges into some locality, the character finds himself in a world of moving blocks, secret doors and strange monsters. All this in every way interferes with the fulfillment of your task and progress. As you progress through, all new types of weapons and spells will be acquired that will help you in your search for your father. The story tells that with the defeat of Melkoir’s master Shadax’s, Galadonia became a happy and peaceful kingdom. But once your father Shadax was captured by the witch Sonia. The kingdom was devastated by severe storms, and the plague began to reign on the lands. You play the role of Glendaal’s, Shadax’s only son. Between the main character and his goal, there will be many enemies and formidable bosses. The puzzles are made very soundly and even, it seems that they are never repeated. Throughout the game you are given the opportunity to test your mental abilities. Several hundred different tricks are presented that need to be thoughtfully considered. Any wrong move will lead to imminent death. This, of course, is one of the best games with 16 Bit puzzles, and for many who have met it at one time, it is one of the best games that has ever been created and perhaps even remains one of the best to date.
‹
›
Home
View web version