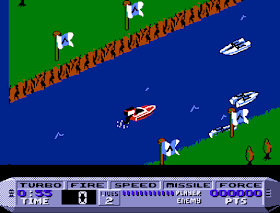 Genre: Action, Racing / driving
Visual: 2D scrolling, Isometric
Vehicular: Naval / watercraft
Published by: Nintendo of America Inc.
Developed by: Rare Limited
Released: 1989
Platform: Nintendo (NES)
Like RC Pro-Am, the game we are considering is an isometric racing action game, but motor boats are presented here instead of cars. The overall goal of the “Cobra Triangle” is to complete all levels in the allotted time, while avoiding various obstacles and enemies: sharks, hills, waterfalls, enemy land guns and enemy boats. As for the specific missions in the game, they are quite diverse and include:
There are 25 levels in the game, including bonus ones. Each series of five levels, as a rule, contains the same gameplay. And the fifth level in this series is always a battle with the boss. The bosses in the game are as follows: sea snake, giant crab, giant squid, red and black sea snakes, as well as a giant shark.
"Cobra Triangle" uses a power-up scale similar to the one in the "Gradius" shooter series. Bonuses are collected and move the selector to various positions. When the desired type of weapon begins to be highlighted, we can select and use it, after which the menu returns to its normal form without backlighting. The following bonuses are available: "Turbo" (increasing the speed of the boat), "Fire" (increasing the number of bullets flying out of the base weapon), "Speed" (increasing the speed of fire and the striking ability of the weapon), "Missile" (improving missiles) and "Force "(force field around the boat plus health replenished). Each boat has a damage scale of 12 points, which decreases when it comes into contact with obstacles or after enemy shells hit.
The base boat in the game is equipped with only one gun, which can be pumped to a level where it can shoot simultaneously with four shots. Also missiles can be added and improved to the arsenal. Between levels that are not connected by water, the gameplay is presented in such a way that a helicopter screw appears on our boat, which is located on top of the cabin. However, the possibility of a boat flying in this state is not used in any way in the gameplay.
‹
›
Home
View web version