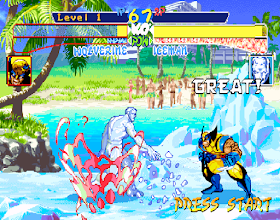 Genre: Action
Perspective: Side view
Visual: 2D scrolling
Gameplay: Fighting
Art: Anime / manga
Published by: Acclaim Entertainment
Developed by: Capcom Co.
Released: 1998
Platforms: PlayStation (PSX, PS1), Arcade Machine
In any new fighting game, if its creators want to attract the attention of fans of this genre, there must be some zest. Capcom developers are very good at achieving this. A distinctive feature of X-Men: Children Of The Atom is an organic combination of the overall concept of fights in a great study of characters. You will not find special effects of 3D graphics here, but fully feel the tension of the struggle! The cruelty of many scenes is mitigated by the fact that all fighters have a cartoon appearance (the characters of the game are the well-known heroes of the Marvel Comics comic book series). Both "good" and "bad" characters act here. With rare exceptions, the composition of the fighters is selected perfectly and well balanced. Of course, they are a bit like the characters from the Street Fighter series of games. For example, Wolverine is a mixture of Guile and Ryu. But this does not interfere with the game, it even helps. There are a lot of new things in techniques, combinations of strokes and tricks. Great sound effects and musical accompaniment create the atmosphere of this game. Especially fun to play in X-Men: Children Of The Atom in 2-player mode.
Battles take place in various arenas that can be chosen by you, or appear randomly. All backgrounds are drawn with outstanding quality, they have a real depth, which gives freedom of movement. You will fight in the prehistoric world, on the beach, under water and even on a moving elevator! Characters move like their animated counterparts, and their special tricks look amazing. Some characters, such as the Sentinel robot, are just huge and occupy half the screen, others, like Storm and Psylock, can soar in the air.
The graphics in this game are more accurate, vibrant and detailed. The producers of the game tried to accommodate the largest number of lotions in X-Men: Children Of The Atom; each character can do combat combinations, super - combinations, super - secret movements and even a hyper - secret super - combination, if you completely fill in the special energy indicator. Also, you can throw fire at opponents with lightning, and on some floors this can bring down the enemy down to the previous floor.
‹
›
Home
View web version