X-Men: Children of the Atom (Arcade) 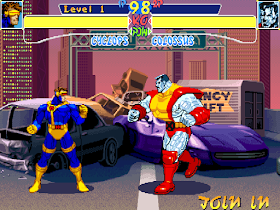 Genre: Action
Perspective: Side view
Visual: 2D scrolling
Gameplay: Fighting
Published by: Capcom Co.
Developed by: Capcom Co.
Released: 1994
Platforms: Arcade Machine, PlayStation (PSX, PS1)
Another fighting game on the theme of "X-Men", in which two opposing groups will fight: under the leadership of Professor Xavier and Magneto. The group of the latter is represented in the minority, for as many as 2 people, a total of 10 playable pieces, but this is not important because they are helped by Juggernaut and Magneto himself, as the bosses of the game, and this is significant. The game looks beautiful, the background of the arena is on top, especially at the Cyclops stage, where the whole environment is constantly changing. The movements are lightning fast and extremely diverse. In order to enjoy all the tricks and practically do not think about protection, there is such a mode as Automatic, where the block is placed automatically, and Manual, this is the standard mode with manual application of blocking. Definitely, comic book fans should like it.
‹
›
Home
View web version