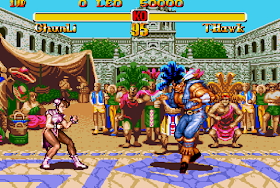 Genre: Action
Perspective: Side view
Visual: 2D scrolling
Gameplay: Fighting
Narrative: Martial arts
Published by: Capcom U.S.A.
Developed by: Capcom Co.
Released: 1994
Platforms: SEGA Genesis / Mega Drive, Super Nintendo (SNES), Arcade Machine
Excellent fighting game, now even more advanced. This part of the game is the fifth version of Super Street Fighter II released during 1994. The game has many innovations, starting from the fact that the balance between the characters has been improved and additional new features have been introduced. Four new characters have also been added. Now the game has 16 characters. And each of them has 8 different color versions. Added various movements and animations. A new combo tracking system was also introduced, something similar to the one in the Mortal Kombat game. A large number of different game modes have been added, both for one player and for two. But the most interesting was that the game released 4 MB cartridge. Which also allowed developers to stuff the sounds and voices of commentators, etc., into the game.
‹
›
Home
View web version