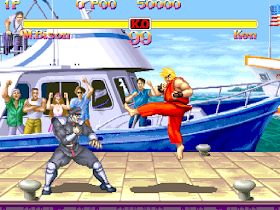 Genre: Action
Perspective: Side view
Gameplay: Fighting, Martial Arts
Visual: 2D scrolling
Published by: Capcom Co.
Developed by: Capcom Co.
Released: 1993
Platforms: Arcade Machine, Super Nintendo (SNES), SEGA Genesis / Mega Drive
In addition to updating and completing the combat system and correcting the balance of the returned characters, the game introduced a series of four new characters. Also, Super Street Fighter II was the first Capcom game developed for machines based on the newly created CP System II system, which was technically more advanced than the previous CP System (for which the previous Street Fighter II sub-series games were developed), which made possible the introduction of more advanced graphics and sound.
The structure of the combat system in Super Street Fighter II is similar to that used in previous versions of the game. The main changes were those aspects of the game that were less related to the combat system.
In Super Street Fighter II, the graphic part up to the HUD was completely updated, which became possible with the technical capabilities of the CPS-2 system. For the game, a completely new introductory video was prepared, in which Ryu shoots the hadon towards the player, and the corresponding musical theme. The animation was redrawn for all game characters; some of them received new victorious poses. For example, all four boss-characters had new animations for their basic attacks (Bega and Sagat had no animation of air attacks in previous games, and their standing and sitting attacks had the same animation), while Chun Li received a new animation for special reception kikoken. Music and sound effects have also been updated to the capabilities of the new arcade system; A new commentator was introduced, which also included voice recording for some characters (Ken, Gail and Sagat).
Super Street Fighter II introduced a new scoring system that tracks the amount of strikes a player has made during a combo, and also rewards players with bonus points for certain actions, such as making a first strike in a round.
Each character now has 8 available colors, each of which is selected by clicking the button used to select the fighter. The player can choose between the original colors, colors from Champion Edition and Hyper Fighting, or one of five new colors included in the game.
The increased speed of the gameplay introduced in Hyper Fighting in SSFII was reduced to the speed used in the Champion Edition. The increased speed of the game will subsequently return to the gameplay with the release of Super Turbo.
In addition to the standard single player and game modes between the two players in SSFII, a new mode of the tournament, which is being run through the Olympic system, was introduced. This mode becomes available after four game machines are connected and configured to play in the indicated mode. The tournament consists of three sets of four concurrent matches: the initial playoffs, the semi-finals and the final. At the end of the first set, players regroup depending on their position in the tournament: the winning players sit down for either of the first two machines, while the losers take one of the other two. In the final, players fighting for the first place, sit down for the first machine, the players in the match for third place - for the second, and so on.
‹
›
Home
View web version