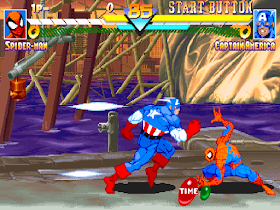 Genre: Action
Perspective: Side view
Gameplay: Fighting
Published by: Capcom Entertainment
Developed by: Capcom Co.
Released: 1997
Platforms: PlayStation (PSX, PS1), Arcade Machine
Capcom decided to return to a 2D image again, and as with everything released by this company, you will need some preparation to get the most out of this game, but when you get comfortable, Marvel Super Heroes will have the same hypnotizing effect as its 2D predecessors, including Street Fighter Alpha. You are offered a choice of 12 characters, each with their own movements, or, if that sounds very sporty, then those movements that you expect to see. Spider-Man knows how to throw cobwebs and sway from side to side, Gromila can beat with all his might, Wolverine cuts, cuts into pieces and cubes, and Captain America launches his sword to fly like a boomerang. As with any game like Street Fighter, you should know the strengths and weaknesses of the characters, as well as the location of the controlled keys, before you start firing from good settings, such as destructive, exhausting high-energy guns. Some characters, such as Spider-Man, need more perseverance than others. At first, he seems weak and slow, and his punches and kicks in effectiveness and destructive power resemble slaps with a wet towel. But then he becomes a fast, powerful and aggressive opponent. The reason for this is that his actions require more skill. Juggernaut, on the other hand, can quickly send its opponents to the brink of life and death with the simplest of their movements. So for starters, he is much more attractive. But later, when the complexity and speed of the game increases, his flaccid limbs will be a hindrance, not only because he is slower than a turtle, but also his specific manners do not already have the discouraging action that is required to fight the poorer and more mediocre Spider, Wolverine and Black Heart. This makes up the game, loaded with tactical art and meaningful episodes of dating, which is especially evident in fantastic combat teams and in eye-catching bright special effects in full screen (you have not seen anything like the techniques of the boss Thanos. This is a fact). The fact that many characters will have to devote a fair amount of time means the longevity of the game, possibly less in solitude.
Disadvantages? Well yes, they are. Capcom didn’t do much in terms of technology. Yes, this is an ordinary 2D combat game, but even music and individual conversations are not showing their best. Winning a fight, the fighters still speak out through text boxes. How about talking a little bit? But if you, like so many, admire Capcom's efforts to create the Street Fighter series, and perhaps you are obsessed with games like Darkstalkers, and also tired of waiting for X-Men Children Of The Atom, then you will love Marvel Super Heroes. And if, moreover, you value, like very, very many, the local humor, then you will not want to look at anything else.
Like the set of control keys in Street Fighter Alpha, Marvel Super Heroes has its own proprietary movement system. Basically, in each fight at the bottom of the screen there are a number of colored pebbles), and become available when you give the opponent the physiognomy), painted in six different colors. This symbolizes time, space, soul, reality, strength and reason, and, depending on the character you have chosen, by means of a quick touch, you can get this or that short-term, but decisive advantage. So, for example, “time” gives the player speed (causing an adversary's attack), while "power" provides awesome striking power to your fists. This is an original and enjoyable addition worth noting.
‹
›
Home
View web version