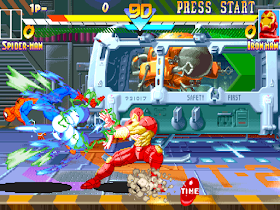 Genre: Action
Perspective: Side view
Gameplay: Fighting
Art: Anime / Manga
Published by: Capcom Co.
Developed by: Capcom Co.
Released: 1995
Platforms: Arcade Machine, PlayStation (PSX, PS1)
The heroes of Marvel comics are very famous characters, despite their American origin. All of them are collected in the game and demonstrate their combat techniques and combinations, a variety of which is one of the virtues of this game. Here are collected very colorful guys. Just look at the Black Heart - Blackheart. This new character as if personifies the evil forces of the other world! Very good is the fast and powerful Captain America with its magnificent jumping attacks and combinations. Well, Incredible Hulk (Incredible Hulk) - with an incredibly powerful torso! Very impressive character. He walks slowly and leisurely. But you will be amazed at the speed of his attacks! Iron Man (Iron Man) - just lightning! His brilliant attacks in the jump, and even with the use of Smart Bomb: any-look. But use it carefully with Uni Beam, especially at close range. This method takes considerable time, and the enemy can evade.
"And here's a completely uncontrolled and uncontrollable mutant." The view is absolutely stupid, but extremely unpleasant. Despite the formidable appearance, Thanas'a can easily be beaten, which can not be said about Doctor Doom, whoever you want, will arrange such a hell, just hold on!
In the course of the game you must collect Gems - precious stones, through which you can get extra lives, power and strength, health and speed of the characters. The game is executed in a beautiful schedule. Characters and landscapes are clear, bright and realistic. True, many actions are performed unnecessarily slowly. Especially when you play for big characters, like Blackheart or Juggernaut. The music is also good, the lighting effects look great.
‹
›
Home
View web version