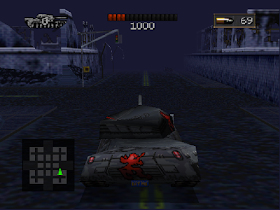 Genre: Action
Perspective: 1st-person, Behind view
Vehicular: Tank
Gameplay: Shooter
Setting: Post-apocalyptic, Sci-fi / futuristic
Published by: 3DO Company
Developed by: 3DO Company
Released: 1998
Platform: Nintendo 64 (N64)
In 2001, the Earth is hit by a virus that kills women. Countries are beginning to fight for zones safe from the virus, which ends with nuclear strikes and the almost complete destruction of civilization. We play for the Griffin Spade leader of one of the surviving gangs - whose girlfriend the US government stole. As we search, we travel around the United States and fight other gangs. The choice is given 3 tanks on one of which you must go through 17 levels. The game has a large selection of weapons to destroy opponents.
‹
›
Home
View web version